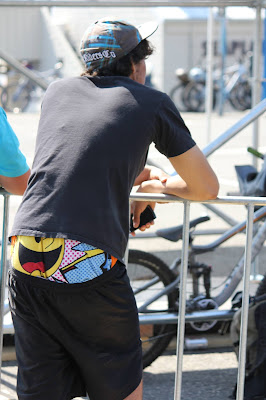 I took this photo ten years ago at an event in the downtown inner harbour.

I thought the photo was cute and it made me smile because, well,  *giggle* you could see his underwear and it was a giant smiley face on his *giggle* bum!  Tee hee!

I tried to make sure he wasn't identifiable because it wasn't my intention to embarrass anyone, I just thought it was something that made me smile so it might make others smile too.

I took the photo and as I always used to, I uploaded it to flickr.  And then I forgot about it, but flickr apparently didn't.

When I went to delete this photo (in my ongoing attempt to reduce my flickr photos to the free level) it had over 8,000 "likes".  And many comments that were..... unexpected?

And that's when I learned that there is a thing called "sagger" and while I can't say I understand it, I have come to understand that, well it's a thing that is, um, attractive to some and now I feel somewhere between weirded out and horrified that I inadvertently made a somewhat sexual fetish sort of photo of a stranger!!!!

So, yeah.  I don't know if that's what this fellow was meaning or if his shorts just fell down or what, but I just thought it was a silly photo and now I know things I had no idea were a thing!

You can never tell what of the things you post to Flickr will turn out to satisfy a Rule 34 interest. I discovered that posting a picture of a girl in a leather jacket smoking was hugely popular.