It feels, or felt, like I was stranded in that town for ages.  And at times, I think I believed I would never leave.  I was as paralyzed by fear as I have ever been.  Or maybe not fear, but shock, or... something.  But there were moments when I would talk to Jason and literally have no idea how I would ever be able to leave.  Because I couldn't drive.... no one was able to come get me, and there was no way I could afford to rent a car... and I wasn't anywhere where there was a car to rent anyway.  But.... apparently I was only there four days. 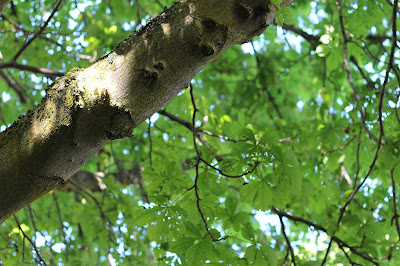 I'm not sure if it was the first or second full day I was there, but Jason encouraged me to try to "enjoy" the day.  Suggested I get out and shoot small town America.  So I pulled myself together as best I could, adjusted my attitude as best I could, grabbed my camera and headed out.

I walked up the main street to a park and sat on a swing for a while, then I walked to the fire station to thank them, but there was no one there.  Went to the police station and thanked them (and cried, damnit!) and then I think I picked up some food and got some chocolate (and had my VISA stop working... seriously?) and went back to the room.  All of this, mind you, was costing me money.  Even though I was in the "cheapest" hotel in town, with the exchange rate and whatnot, it was still about a hundred bucks a night.  Plus whatever food I was eating, or the shampoo or whatever I bought with the last of my cash...

I got home and I had somehow managed to get a blister on the bottom of my foot.  And that was somehow yet another last straw.

I had no way home.  My VISA wasn't working.  My phone had been over-charged.  And now I had a blister.  It was almost amusing if it hadn't been that I had to deal with all these things.

I then spent several hours, yes HOURS on the phone with various companies trying to figure stuff out.  Like the phone company who "fixed" the problem after I waited online for an hour and then got cut off and then waited again for another 45 minutes and then had to get called back and so on and so forth (no, they didn't actually "fix" anything, by the way, it would take me another two months to get their repeated screw ups sorted... I am still outrageously mad about that) and VISA (because they shut down my card and I understand they were trying to protect me but it was really bad timing and again, about an hour plus on the phone to get it reinstaited, and yes, they knew I was travelling in the states... sigh) and BCAA and the insurance company and the RV-specific insurance company and basically everyone said "oh, wow, that's too bad, and, well, we can't really help you, sorry" so that did not help how I was feeling about anything.

I don't remember too clearly which days where which, but I had one last set of friends who "love to drive" that I thought might be my chance of having someone come get me and I messaged them at a place I'd walked to (with my stupid blister) and they said I should just get the van fixed and drive it home and I think I just gave up.  No one seemed to understand what I had just gone through.  Even if they fixed the van, which they hadn't, and had no timeline for, even if they fixed it, I was too traumatized and freaked out to drive it.  Jason understood that, but no one else did.  I was frozen by the fear of it all and just wanted to live in this hotel room for the rest of my life.

I spent a lot of time in that hotel room... zoning out with watching whatever, or being online, or talking to or messaging Jason or C-Dawg or whoever.  I saw no way of getting me home and that's the only thing I wanted to happen.

At some point, probably Thursday, Jason said it was time to stop waiting for the van to get fixed (every time he mentioned that I would be ok driving it home I re-iterated that there was no way, I just wasn't able to do that and couldn't afford to keep spending a hundred dollars a night to stay here) and get me home.  I said there was no way to do that, and that I had no money anyway.  (The van had cost me more than double the budget I had had for it, and now this....)  Jason then basically held my hand through the next day or so, and without that I would be in a lot worse shape.  I was non functional.  He dealt with everything.

Jason found a bus that ran from that town to Reno, the closest international airport (about three hours away) and Jason found me a travel agent at home to help me book a flight out of Reno... oh, because RIGHT, I forgot about this.... (SWEAR WORD!)  Remember when Max and I were going to go on that trip and then he ended things?  I can't remember if I mentioned it at the time or not but Expedia and the airline wouldn't refund my money.  A thousand bucks they wouldn't let me have back, but would allow me to have a credit with that airline, minus three hundred bucks.  So finally I had a reason to use that flight credit, and thank goodness I had it, to save me some cash.  So I contacted Expedia (waiting yet again for ages on the phone) and was told that I could only use the credit to fly from the originally booked country of origin (Canada.)  Are you kidding me?  I explained my situation... literally stranded... no way home... like, not exaggerating... "Sorry Ma'am.  Would you like me to help book you another flight?"  And again, I don't usually swear at customer service people but in this case I did.  "No, I will fucking do that myself."  The lack of care shown by the businesses/corporations I dealt with was appalling.  They should go back to when the people working for them were able to act like humans.  So Jason gave me the number for a travel agent back home who booked me a flight out of Reno (I probably could have done it via Google or something but at this point I just wanted help and to not have to figure stuff out on my own) and Jason booked me a spot on the bus the next morning... the Friday morning.

I told him I still couldn't.  I had no suitcase.  I had no way of carrying my stuff on a plane.  And you guys these panics that I had felt utterly real and intense, even if you're reading them not seeing why I was concerned, everything was completely overwhelming.  I had no way to get my stuff home.  The stuff I had in my room with me was my travel bag and my computer "backpack" and a couple of shopping bags and my camera bag and I couldn't carry all that on I couldn't get on a plane, no way.

Jason called the mechanic, talked to the lady there... she recommended a thrift shop on main street and said if they didn't have suitcases the local church might.  So Jason told me this and told me to go find a suitcase.

So I, yet again, steeled my frozen and terrified self, bandaged up my frustrating blister, and walked to the thrift shop.

It was all the things you ever imagine from a stereotypical thrift shop and I was wandering through it when I ran into the sheriff who had helped with my van and when he asked why I was still in town I explained that the van was not yet fixed and I had to fly home and just needed a suitcase.  "There's one way at the back there," he said, and sure enough in the back room there was an old suitcase that would to just fine.  I went to pay.  They weren't able to take my credit card (something about not being able to process Canadian credit cards) so I asked them to keep it aside for me and I went to find a bank.  (Sigh)  Got out cash (Jason told me to get out a couple of hundred which came in handy for airport fees and such) and went back and picked up my ten dollar suitcase and went back to the hotel.

Then, before I could collapse again, I took myself to the van.  I emptied out the water containers and ice... impressed that my new coolers had kept ice so well (yay) and tried to think what I might need... I grabbed all the underwear I could find, and a couple more tshirts and I tried to tidy a bit but it was hot and miserable in there so I locked it up, cried a little... feeling like I was abandoning her, told the mechanics that I was flying out the next day and thanked them very much.

They were awesome.  Promised I could keep it there as long as I needed for no charge.  Jason had talked to them about whatever needed fixed and the fellow had told him that I'd been really, visibly shaken up.  Which surprised me... I thought I'd seemed pretty calm.  Shock I guess.  But yeah, I left the van there and walked back to the hotel and packed the suitcase as best I could, reducing the bags I was carrying to my purse, computer backpack and suitcase.

I don't know if I ate, or had leftovers or what, but I knew I had to be at the bus stop, thankfully not too far away at 7 the next morning, so I told myself to try to sleep.  It had been a really long few days, and knowing I was going home wasn't making me feel all that much better.
Posted by Victoria at Wednesday, November 09, 2016

Oh, honey. I don't know how you survived that. But I'm glad you did.

as if everything that had happened wasn't enough, dealing with "customer service" from large companies is enough to drive anyone around the twist.

you deserve a medal for hanging in there!!

I don't know how either Kandijay...

Oh man Solo Roving, that was SO frustrating and really not helpful in any way! Ugh.

Just so many hugs.