A Long, Strange One 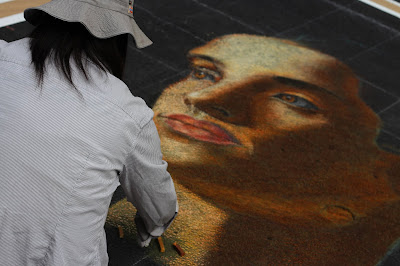 I had (yet another?) night of stress dreams.

Or at least that's how it felt when I started to wake up.  For all I know, as these things go, it could have been an all night long dream (not really likely) or a short dream before waking up, who knows.  I just know it wasn't a stress free night and the dream stuck with me.  So now it's story time, hooray!?

Ok, so in the dream, C-Dawg and I were in high school together and also in the musical together.  It was a performance night and after we did our scene together (I think it was the musical I actually did in high school) I went outside to have a quick break and to cool down (hot in real life too!)  I lay down on the basketball court and then noticed that a house was on fire so I lazily watched the house go up in flames and the fire trucks come to deal with it.  At some point I realized I'd forgotten to go back to do the rest of the show and that I had no idea how to get back into the theatre and I really hoped someone had been able to take over my part and so that was super stressful.  And then the dream (same dream?) changed a bit and my Mom was coming to visit at school and I was walking her through the gym, which was in the bottom of the theater (think of where an orchestra pit is?) and it was boy's PE time and a basketball unfortunately hit my Mom's head really hard and half her face swelled (swole?) up right away and I was trying to keep pressure on it (either that or stop the bleeding or give reiki, I don't know) and someone was calling 911 but they were a long ways away so I was sitting outside with my Mom on a picnic table waiting and because my Mom was concussed she took off her top and was naked and some guys thought this was hilarious (stupid teenage boys) and I did NOT and got mad at them while trying to keep pressure on her wound and get her clothes back on and it was all just NOT RELAXING.

I feel like your writers room needs to work a better draft for your dreams.