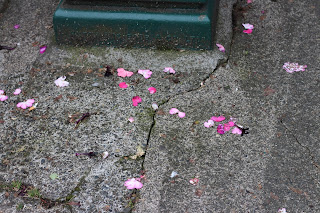 The forecast called for "smoke" which isn't a weather exactly but is what has been happening as the smoke from Washington state and Oregon state (and California state?) wildfires has been getting... I dunno, pushed?  sucked?  up this way for the last week or so.  We first got it, I dunno, last Tuesday?  And it was a weird smoky sky hot day and I did walk to/from something and then thought better about doing much more outside stuff.  It was clear the next day and that was lovely and I thought we were good for the rest of the Summer.  (Or as some have sadly taken to calling it "fire season").  But then the smoke came back.  I'd meant to "do something" about it a year or two ago when we had smoke from more local fires.  But an air purifier wasn't in my budget and I told myself to just deal with it.  And then I said last year that I'd buy something to help filter/purify my air but again... money, so I didn't.  And even this year as we headed into Spring I didn't.  And even this weekend, I thought about purchasing something or other (maybe filters for my windows like I did on my van window for Burning Man?) and then... I didn't.  (I'm scared of spending money in a way that some part of my brain deems "unnecessary" - you know health and comfort and wellbeing.  Sigh)

Anyway.  Here's the weird part.  On Saturday (?) we woke up to... fog?  Like that low lying mist cloud fog thing that FELT damp and yes it was cooler.  And it smelled like ocean, or water, not smoke.  But the forecast still said "smoke" and the air quality reading was "highly dangerous" so it wasn't fog?  It was... fog with smoke?

So windows were closed and fans were on but outside was cool.  And smelt like "fog", but the forecasts didn't say fog, they said smoke.  And "overcast" and I guess maybe if I'd watched an actual meteorologist like on a newscast or something they might have explained it but I spent the weekend slightly baffled.

I opened my bedroom windows at night, it's hard for me to sleep without cool/fresh/moving air and I can't sleep with fans going anyway so yeah, I guess I've been breathing smoke overnight but on the flip side (gross coming) my nose blowings haven't been soot coloured (like previous years) so I'm hopefully doing ok?  I dunno.

I'm surely inhaling stuff I shouldn't be.  My throat is sore and not in a "I'm sick" kind of way and I'm trying to stay hydrated and I am trying to keep my windows closed when I can but oh man that lack of fresh air gets to me.

I had some funny thoughts this weekend like I'd wake up and think "I'll get a walk in before the smoke gets bad" like the equivalent of exercising outside before it gets hot.  And well, you know, smoke and wildfires don't really turn off just because it's night/morning.

I also found I was waking up pretty early this week.  Not sure what it is about the smoke... maybe heat too that didn't mesh with sleeping past 6 or 7 but that just is what it is, not going to try to force sleeping later on a body that wants to be out of bed.  Plus it's not like usual when I can just roll over and push another "long morning nap" on myself in bed.

On the Tuesday day I found my car had ash on it and on a drive I had to go on, I had to spray my windshield down a few times, but knock on wood, this weekend I've only had to spray the windshield when I first get in.

I know people know more about what's happening in the sky than I do, and maybe even some of you do!  But it was strange.  Fog like "low cloud" and the occasional "fog" horn but wicked bad air quality and a forecast of "smoke".  And low visibility.  But smelling like ocean/water/fog.

I never take fresh, clean air for granted (even when it's hot hot hot) and I think we're all hoping that the smoke clears out today and for this week.  And I know I am hoping that these fires are slowing, and stopping and I'm not even thinking about the future for this coast as I don't have enough chill in me to do so.