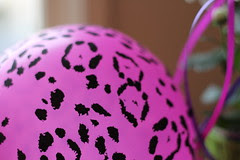 One of the things my physio and rehab people have recommended (as I continue to try to find a way to live pain free from the accident) is yoga. And while I used to enjoy yoga before the accident, the idea of it has made me nervous until very recently.

Which is why I found myself at a beginner's yoga class at the gym last week.

But once I'd sat there stretching for a few minutes before the teacher arrived, I was happy I'd gone and interested to see what this instructor was like.

Turns out, she was a woman with a slight eastern european type accent.

Which wouldn't have been a problem, except when she told us we'd spend the first ten minutes focussing on our "breast."

Which, was, unfortunately, how she pronounced "breath."

And you realize this is giving you the giggles.

Especially when she says "now tuck your chin towards your chest and focus on your breast" and I'm sitting there staring at my breasts and telling myself that I had really really really better not start giggling.

Especially since no one else seems to be hearing her say "breast" and then thinking about that fact makes you want to absolutely not laugh which make it even harder to NOT start giggling.

But, I managed to pull it together, and soon enough we moved on from the focus on our "breast" and got on with the rest of the class.

Why do I gotta be so immature?
Posted by Victoria at Tuesday, February 21, 2012

Worst feeling ever. Lol. Giggles in yoga is one thing (I am a frequent yogi myself) but when you are dealing with a repetitive stimuli such as "Breast" for "Breath" ... well let's just say it's a good thing I wasn't there too because one look at each other and we would have gotten kicked out.
That being said, I hope you'll keep going. Yoga is SO great for rehabilitation! Good luck!

Really good thing you weren't there! :)