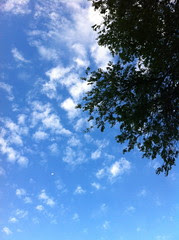 I woke up Sunday pretty nervous.

This was the day we were going to get to Burning Man.  And what would that be like?  I'd survived the road trip, I'd more than survived actually.  I'd been mellow and relaxed and happy and moved so far away from Jay that I didn't feel I wanted to see him once we got there much or at all.

We had a plan to get to somewhere or other before we stocked up on food and water and planned on getting to the gate near (but not before) opening (at 6pm.)

We'd had another gentle start, all of us crowded together in a "big bed" situation we made by sticking my foamie between the two beds we'd tried the night before.  I think I'd slept so well the first night because I'd had so much less anxiety, and because I'd gotten up at four, and because we'd had a 17 hour day.

I was also so grateful to not be driving.  I would have been exhausted had it been me.  I'm not sure I would have made it, actually.  I would do another big road trip in an RV, but I don't think I'd do it in a car.  I can only imagine how uncomfortable I'd have been in Jay's car, I wasn't even comfortable in it in local trips.  Hurray for RV big back bench seats.  With seatbelts to boot!

We stopped at the edge of the campground to fill up with propane and then the RV wouldn't start.

He thought he'd flooded the engine, which had always needed a little convincing to start (the RV's an older one, if I haven't mentioned that before, but new to our driver) and so he tried again.  And then again with a battery helper.

But it just wouldn't start.

I started to worry that we'd be stuck when we tried to leave, during "Exodus" at the end, or that we'd get stuck on the Playa.  And I started to wonder at what point we should "do" something, rather than just waiting for the RV to feel better about starting.

And then he found the leaking.

Of something that shouldn't have been leaking.  And there was a trucker fueling up and we asked him to take a look and he was pretty sure it would be an easy fix for a mechanic.

Except that this was a Sunday, and we weren't in Victoria anymore where we could have found an open mechanics.

So we called BCAA (our road side assistance) and got a tow back to our camping spot.

Everyone we met and dealt with was awesome.  The propane truck driver, the tow truck guy, the local purple bearded Burner, all of them were so nice and kind.

We walked to breakfast, where again, everyone was lovely, but I wasn't particularly hungry.

I was a little sad and disappointed that we weren't going to make it, but I also felt very "it is what it is" and that we'd averted a worse situation like being stuck on a highway or breaking down somewhere where it would have been difficult to get help.

We wandered through town after breakfast, checking out the Kmart and the Thunderbird.  Then we hung out and mellowed out.  One of the girls finished sewing the gifts she was bringing, and we sat through a cool thunder and lightning storm late that afternoon.

More Burners rolled in that evening and I felt relieved.  We weren't going to be the last to show up, it would be ok even if we should have been there in a couple of hours.

We used the GPS to take us to a Pho restaurant (walking, of course) nearby but it wasn't there, so we ended up at a BBQ place that'd been recommended.

And I hit a wall.

One of the big tvs in the place was showing Big Brother and I zoned out on that for a while.  I'd told everyone that I was feeling really like I needed time and again, I didn't feel worried that they wouldn't like me.  I just wished I could be alone.

We three girls ordered what we figured would be the smallest salad in the place and when it arrived it was beyond massive.

We'd all noticed that the last day or two, the absolutely giant portion sizes we were being served.  But this salad was beyond even that.

Apparently our faces were a sight to behold.

I can't even describe how big this thing was.

We walked back to the campsite, with no lights on us or the streets ( I was still so in need of time to myself and found this stupidly dangerous) and we rearranged sleeping spots (I'd not slept comfortably the night before) and I read some of my book, or skimmed some pages at least and then we slept.
Posted by Victoria at Friday, September 13, 2013