The Trip - Day One 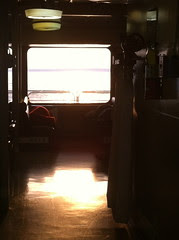 There are a few ways you can get off the Island. (Victoria being located on Vancouver Island, on the West Coast of our fine province.)  We took a vehicle/passenger ferry that would take us to Port Angeles, Washington, and since we were going to catch the (oh so very) early morning ferry, which meant being there (oh so very very) early Friday morning, we piled into the RV (really a camper van, but RV's much more fun to say) and drove down Thursday night.

Apparently that's a thing.  That people will drive down the night before and park their cars in the lot in order to get a spot on the ferry.  We ran into a ton of people heading down to Burning Man, cars and trucks packed full and decorated bikes attached to the backs.

We also, unknown to me, ran into a gal who was taking down a Victoria-built art car, something that had been featured in the news the week before.

I hadn't slept much at all the week before and there was no sleeping Thursday night.  Sure, I lay in bed with my eyes closed, but I did not sleep and I barely rested.  I was horribly anxious about the trip.  Even more so than Burning Man itself.  I didn't know how any of it would go and I think I mentioned, I'd debated flying down or somehow avoiding the whole road trip entirely.

I don't think I've ever been so wide awake at 4 something in the morning, and it was kind of neat to wander through town to the ferry terminal that early in the morning.  I was nervous, sure, but kind of figured that this was happening now, and I may as well just go with it.

The sun came up at some point and it was neat to be on a different ferry ride than the one I'm used to.  I spent a lot of the trip marvelling that my cell service hadn't switched over to US roaming as there's parts of Victoria where it'll think you're in the US and here we were an hour into US waters and my phone still thought we were in Canada, eh?

I chatted with some people in the line for the cafeteria, met a nice local First Nations chief, and felt like things were going to be just fine.

I started to feel a little motion sick right at the end of the trip so I took a Gravol (dramamine) to be safe.

We got to the other side, had the sweetest boarder guard ever, stopped for a fill of gas and were on the road.

I think, honestly, that the Gravol may have given me a little extra mellow, and I'm totally fine with that, but I feel like I was really mellow and calm.  I kept shifting my sitting position, knowing that my body might not love sitting for that long, and I made sure I stretched when we stopped.

One of our troop kept needing pee breaks, which earned them the nickname "hamster bladder" from our driver.  Not that I didn't use the pee breaks when we got them, but I think I'm pretty good at holding it in when I have to.

We stopped somewhere for lunch, I'm guessing it was in Oregon.  Washington ends up being a rather short state compared to Oregon, at least the way we were travelling.

We also stopped at a Whole Foods, my first experience with one of those.  It was a glorified pee break so I didn't see much of it, but can see why people like them.

We stopped at a KOA site somewhere near Salem (I think) and drove into what turned out to be Corvallis for dinner.

Corvallis was awesome.  Such a great surprise.  Super cool and we all just loved it.

The Gravol made me a little dozy so I half slept here and there.  Travelling in an RV is surprisingly comfy, and I was so so grateful not to be driving myself.

I had no cell service for most of the trip, but when we got to our site, I got wifi and had a text from Jay.

Which made me realize I hadn't thought much about him at all.

It's as if I got on the trip and it was all about me instead of having anything to do with him.  It became my trip.  In so many ways, now that I was on the road, I was fine.  Which was a really nice surprise.

At some point on Friday, I remember thinking to myself that there was a difference between caring and caretaking.  The (awesome and mellow) girl who was sitting in the back area with me had caught a nasty cold and while I cared about how she was feeling, I didn't feel the need to fix her or to try to caretake for her.

This may not seem like much but it was kind of a big deal for me.

I think not knowing these people was an opening for me to look at how I interact with people and since I didn't have any feeling of expectation from them in terms of who I am or how I should behave, I felt very free to just be.

Which was also really relaxing.

We had a nice dinner and only briefly went down a one way street on our way home, and then we arranged the RV for sleeping and I completely crashed out.

It was the best sleep I'd had in weeks, really.