It Just Made Me Angry 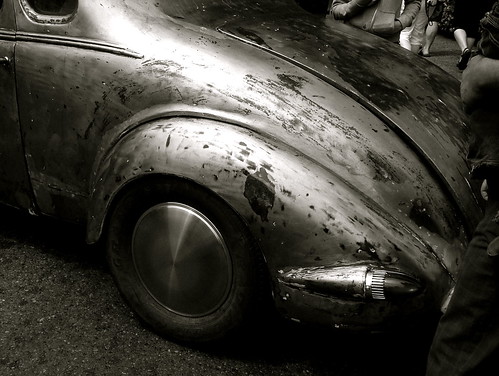 I've put off writing about this because it makes me angry.

But it keeps hovering at the back of my mind as something I have to write about, if only to get it out of my head.  I don't know... but here goes.

I was driving to work the other morning and as I turned onto one of the main streets a black BMW convertible sliced out in front of me.

I had to brake a bit to give him space as he cut across lanes from his parking spot and found myself a little surprised he hadn't been paying more attention.

I watched as the older gentleman then reached around to his windshield, pulled off the parking ticket there and chucked it onto the ground.

I then continued to watch as he did not signal, and did not yield to the pedestrian crossing, with the lights on the crosswalk.

I don't know.  The thing that made me angriest was his littering.

I mean, crumple it up and chuck it to the floor of your car for pete's sake... don't litter with the thing.

It just seemed so...

"I'm better than everyone else"

And I know that's just my judgement and I have no idea what was going on with him or his day or what internal struggles he's going through right now but the combination of his actions did not sit well with me at all.

And I guess I just feel like I wanted to tell on him somehow.

So there you go.  The white-haired guy in the convertible BMW is a big litterer and doesn't care about parking tickets. Boo to him.  Boo, I say, boo!

It's my theory that people who drive BMWs think they're unique snowflake unicorns to whom rules don't apply.

It's just a theory, but its based on observation of the very thing you're describing.

You obviously haven't heard...BMW's (and usually Merecedes) come with a built in right of way that allows their drivers to disregard all rules of the road...

Maybe this is just an Ontario thing...but I thought it was universal...at least in my experiences it is universal...