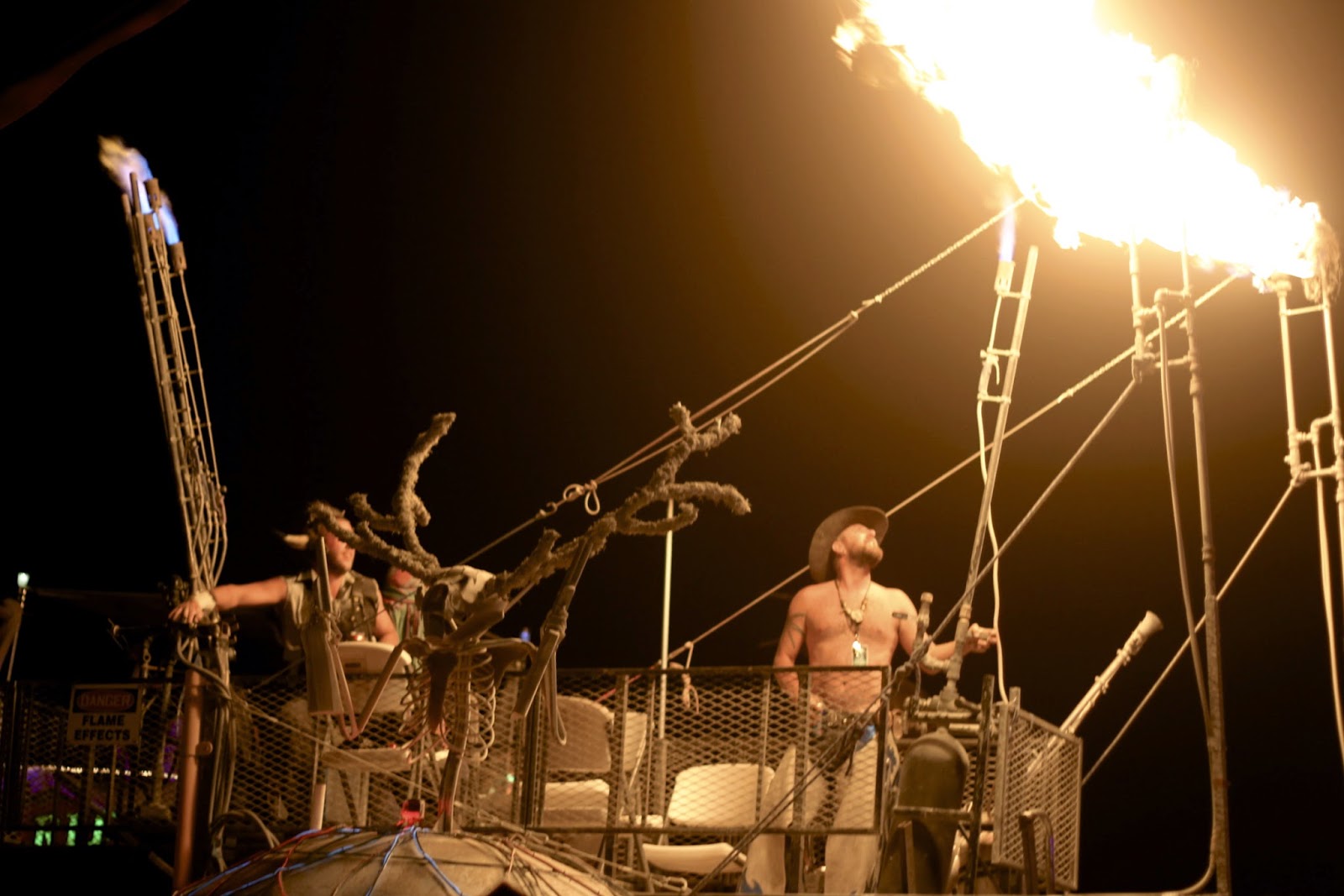 I just lay there thinking about the way I'd tried to describe that "fire party" in my post yesterday and how I'd come nowhere near to managing.  And the thought of that wouldn't let me sleep.

So here I am...trying again.  Hoping to get at least somewhat closer, but knowing that even then, Burning Man is not something you can really fully understand and appreciate until you've been there.

This photo.  This photo is from last year (and no, I didn't upload it to flickr, but I wanted to show you a photo because I felt that might...sort of help) from after the Man burn when I wandered around the circle of art cars and spent ages watching this one particular art car making fire.  This photo is one of my favourites from last year because this was one of my favourite moments.  And although it's not from this year, it does show a little bit of what I'm trying to describe.

Um... at night that is.  (Sorry, I just feel the compulsive need to make sure no one thought I meant "dark"... like... brooding and mean or whatever.)

It's not like going to the beach at night and thinking it's so dark because the nearest streetlights are an entire block away.  It's not even camping dark... it's hard to explain.  You're just out in the middle of this vast open space and there is no light.  This year especially as the moon was (crap, what's the term for a not-full moon...waning?) not really there at all and stars don't actually cast light (don't get technical on me here, I'm describing, not Science-ing.)

So it's basically pure dark out there unless you count looking back at the city and seeing the neon lights of the camps.  Because Burning Man does light up at night.  It has to... this is sounding redundant but it's frigging dark.

When you're out on the playa (the open space where the art is, not the city where the camps and people are) there are no theme camps or sound stages or flood lit dodgeball courts or skate parks (yes, these are things) there are just scattered art installations, some of them lit, some not, and there are bikes (which should be lit, but some are not) and there are people (who should most certainly be lit, but many are not) and there are the art cars.  (Which have to be lit, and approved as lit enough to be allowed to drive at night.)  The art cars are fun during the day and spectacular at night.

There are art cars in as many different shapes and styles as you can imagine but the ones that most capture my attention are the ones that have... for lack of a better term... flame throwers.

Like the car in the photo above.  I couldn't even tell you what the vehicle itself looked like.  Probably some variation on a truck, because it was what was on top of this art car that mattered.  Six, eight, ten flame throwers that when pulled (by the certified flame...person, because although there is a saying on the playa "safety third" the truth is, when it comes to things like fire?  it's safety first and above all else.) shot out flame like streams of fire, but also a loud... whistle sort of scream.

So each time the mad-max looking guy would shoot out flame there would be this scream of noise and this rush of the noise of the flame itself and a blast of heat as if you were standing right next to a campfire because...well, all of a sudden you are.  And the light.

Again, if you look at the photo... and close your eyes and use your hand and just look at the right hand side of the photo?  Could be daylight.  Orange daylight sure, but it's that bright.  So you're standing by these art cars and it's dark but not pitch black because some of them have neon or LEDs or whatever else they have to make them bright and there's music thumping away from most of them and then it's BRIGHT like daylight and hot like you just stepped into the drier mid cycle and it's this huge blast all at once and it's exhilarating.

So that first night this year, the Sunday night, when we biked over to see the art installation shooting fire.. and the group of art cars seeming to have a "I can out flame you, you glorious piece of work you" party or flame off or something... it was so very Burning Man to me.

Because I don't go to party, I go for... something else.  Something I can't always put my finger on, but the effing fire?  The things that throw fire and shoot fire and make giant fire balls fly into the air and shock me with heat and light and noise and holy sh*t it's so much a reminder of how alive you are?  That's Burning Man.

But, you can go to youtube and search for something like "burning man art car fire" or something and see a video like this one, that is sort of like what I saw (El Pulpo is my favourite... a Burning Man "sweetheart") but it still won't give you the real feel of it.

It rattles your body.  Well, mine anyway, and I feel each flare and burst in my heart and my soul swells up and wants to explode with it and then when they give off a big burst it's almost too much.  Too much heat... light... energy...and then it stops and you can breathe again.

I don't know if I've come any closer to trying to explain just this one moment.  This one tiny piece of this place and this time and everything.

But I love Burning Man.  And I wish I had the words to put you there even just for a moment.  But words are not enough.

Posted by Victoria at Wednesday, September 24, 2014

You've done a great job at describing the feeling. I understand.

We live out in the sticks...out of town at the end of a dead-end street with no street lights. The hills protect us from the light from town. The only light there is the moon, stars, and whatever lights the houses on the street may or may not have on. It's dark...like can't see your hand at arm's length dark.

Three summers ago, around midnight one evening, our neighbour across the street had a fire in a trailer he was pulling up to his house. I help douse the flames enough to detatch his burning trailer from the truck. The fire was scary hot, scary bright, just scary...but also very cool. Fortunately no one was hurt...neighbour and I both had some little burns...but the trailer was a write-off.

So I get what you are saying and you've described it perfectly. Fire is beautiful, scary, and just wow...especially unexpected fire bursts in the middle of blackness.

I think I understand. Sometimes words aren't enough, but your trying is worth it.

Totally Elliott! Fire is so amazing when it's doing what it's supposed to be doing, and I like that you know what I mean by the dark :)

I'll keep trying Jason, as long as my brain will let me ;)