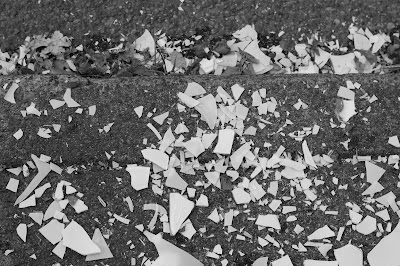 Tuesday morning, I felt like my grumpy had taken on a more specific target.

Jason, the week or so before I left kept telling me to "find my people."  Like, to go to Burning Man and find my... tribe.  Or something.  My collection of people where I just felt like I clicked.

I'd had a couple of experiences with him that summer where I'd found myself drawn to someone or just noticing something about them (a tattoo, or, in one case a Burning Man specific joke on their hat) and upon asking them if they were Burners, I felt like I was immediately with good people.

I think maybe he thought I'd go to Burning Man and be surrounded by tens of thousands of these people I'd just click with and feel at home with.  I was fairly certain, knowing myself and knowing what it's like there, that this wouldn't happen.  But what I woke up knowing on Tuesday morning, and what I wrote about in my journal for the first two pages of "Tuesday" was that I definitely knew who weren't my people.  And what I wrote at the time, although it pains me to re-print it here, is that the ones who weren't my people were the ones I don't like.

It's hard for me to admit I don't like someone.  Or someones.  Something in me feels obliged to love everyone.  Or that I should like everyone.  Just because they do something I don't like or act or behave a way I don't like, I still feel like I should... like them.  Cut them slack.  Accept them as flawed human beings.

Here's what I wrote:

- the frat boys, the 20 somethings, the sparkle ponies and fucking hippies

the ones who care too much

I hate the frat boys and female equivalents and I feel them on each side - taking drugs, being drunk - fuck that shit.

I remember writing this and being ragingly angry.  There was more to their conversation and I heard it all.  The "teasing" of the friend for not having sex with the girl.  "Too many drugs?  Couldn't get it up?"  And I had to stop myself from marching over there and yelling at them to show some respect and that women were not there for fucking and using.  And the drugs.  I've never been a fan of drug culture, or drinking culture for that matter, but neither am I saying I'm entirely innocent (I was young once too, after all) but I do not understand why you would take a massive mix of chemicals like this young "man" apparently did.  I do not want someone to explain it to me either, I just hate the fact that some people come to Burning Man to do masses of drugs.  I hate it.

And I hate that some people, and I'm sorry, it's mainly younger people seem to think of this whole thing as this massive party where you get free drugs and can have sex with any gorgeous person you see.

The societal background that goes with this is something I will not even begin to talk about as it is something that either enrages me or upsets me and I don't feel like there's much me blogging about it will do....

But I really felt like I knew who at Burning Man were not "my people".  Or to put it in a slightly less angry way... I knew who were the people I did not feel connected to.

Did I want to look good for show?  Not really.  I wanted to feel like I didn't look unattractive, like I felt last year.  I wanted to feel comfortable, but I did not want to be walking down the street and having men drooling.  I did not want people to stop and exclaim at how gorgeous I was, and I feel like for a fair number of the twenty something crowd... this is what it's all about.  I know, many of the photos you see of Burning Man include gorgeous, sexy, scantily clad women, and I know sometimes it's hard not to be influenced by what you see and what's shown by the media when you're young.  (And possibly for some when you're older, but I do feel that with age does come wisdom, and with that, the ability to decide to not give a shit about what you're "supposed" to do/be/act/look like that is more of a concern when you're a teen or a twenty.)

For me, I take it as offensive when the reason someone is coming to Burning Man is to get wasted and/or to be/do sexy chicks.

It's so much more than that.  Or it should be.

I was frustrated to be surrounded by these "frat boys" as my neighbours.  These clearly first timers who seemed to not have an understanding of WHY Burning Man.

They just wanted to party.

My University didn't have fraternities or sororities, but I've never been attracted to the "let's get drunk and party" guys.

Which is ironic, because I've always enjoyed me a good house party, and I've always enjoyed getting drunk and partying.  But I'd be the one hanging in the corner on the couch with the surfers, the stoners, the musicians, the D and D players, the artists and the interesting people, not with the ones who were mannning the keg.

To be honest, I don't even know how to play beer pong.

But I do play a mean game of caps.

There is nothing wrong with not feeling a connection with everyone...or not even liking everyone. I agree with you...I'm not a fan of people who are always trying to hard. They are so fake and how can you like fake?

I've never understood the partying scene either. And I hate going places to enjoy something and have someone nearby be in the party mode. The worst for me are concerts...I don't understand why you'd pay good money to be so drunk/stoned/both that you don't feel it or remember it. Dumb in my books.

I'm the other person sitting in the corner watching...assuming I go at all. So I understand.

It's to accept the fact that you can not care (better than dislike) people and still be a good person. I've accepted that life is too short to waste your time with people who don't interest you...no harm, no foul.