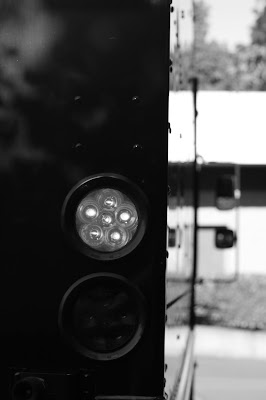 (I'm having a hard time believing that I'm only on Wednesday of my adventure, but each post is taking me at least an hour to write and then I'm all ... needing a break!  It's crazy... I didn't even make it all the way through Wednesday for Pete's sake... poor Pete...Anyway...)

One of the notes I made for myself is to "not bring janky stuff to Burning Man... it'll drive you nuts"

For example, Connor and I decided to go with a giant water bottle (you know the ones I mean, they go in water cooler type things?) rather than several small ones and so we bought them in Oregon and also bought a pump for them.  I'd thought of pre-buying a pump up here, but figured I'd just get it there.  When we got to the playa, the pump turned out to be... pretty janky.  Not exactly awesome workmanship and not easy to get working.  Which... is incredibly frustrating on Playa.  We had to hold it a particular way while standing on one foot facing North North East and humming "Living La Vida Loca" to get it to work (I may be exaggerating slightly but it felt super annoying) and I ended up getting really frustrated with the thing.  Some days only Connor could get it to work, and I need to remember that cheap, jankily made things are not worth taking to the Playa because it'll just drive you nuts.  The dust makes everything work a little less well anyway, so take good stuff and it's less likely it'll be ridiculously frustrating.

I made myself another note Wednesday that said I wasn't as bothered this year by the hot, thin, pretty 20-somethings.  Either they were lovely (like the Australian girl from Tuesday) or sparkle idiots who I don't like anyway so screw them.  They're not me, that's for sure, and that's a good thing!

A few other notes I made Wednesday afternoon as I sat at my sitting spot were watching people bringing huge "pee jugs" to the portapotties from their further away camps.  Also, me making "pee buddies" with a camp of nice nice people who I "met" because I kept walking by them on my trips to the porta potties and back.

I sat with my Pee Buddies for a while most days and on Wednesday, we were sitting chatting and eating pie when this PYT (pretty young thing) wandered over to where we were and asked if we had any water she could drink.  She looked close to tears and so we gave her water and insisted she come sit under the shade.

Long story short, she'd been given a ticket randomly the day before and had gotten a ride with a guy and had had him just "drop her off" around where her friends had said they'd be.  She was hot, overwhelmed and lost.  The place is so much bigger and less organized than you'd ever know if you'd never been before and this girl clearly had no idea what she was getting into.  She was a few blocks away from one of the camps her friends were at and we pointed her in the right direction.  She was astounded that it was "so far" away, but I was astounded that she had no water on her, and nothing more than a bag thrown over her shoulder that couldn't have held much more than a few items of clothing.  Yes, she was meeting friends and I'm sure they were going to take care of her but still... Radical Self Reliance babe... the desert is trying to kill you and you need to walk into this place being able to survive on your own if none of the rest of us exist.  Or if, say, you never manage to find your friends because the "address" they gave you means very little and will have you wandering around in the heat and elevation with no idea of how to find them or how to take care of yourself.

I wandered back home myself not long after that and continued to document the random things I was seeing.

Like the guy who got his flowy outfit caught in his bike wheel that had me chuckling evilly and making a mental note about any future flowy outfits I might one day wear.

I watched another guy bike past and let out a massive belch that made me giggle.

It was hot.  I know I said it Tuesday too, but this was our hottest day so far.  Connor's thermometer on the side of his truck said it was 44 degrees Celcius, but that... that couldn't have been right because that's like 111 Fahrenheit so the thermometer must be broken.  Right?  Right.  But it was hot, lordy lordy...

We went for dinner and I found myself grumpy again.  I was annoyed with Connor and so I told him that evening that I wanted to have some time to myself and I took off for Center Camp.

There was a lovely singer on one of the stages from Australia, there on his first burn and I sat and listened to his lovely music for a while, just chilling out.  I wrote some... drew some.  And I smiled huge, when this young, long haired blonde guy sat down and offered beer and water to his neighbours.  When the singer took a pause, he offered to fill up his water bottle and I thought to myself now that's a Burner.  Giving.  Caring.  Thoughtful.  Kind.  Awesome.

I wandered along Esplanade to the 4:00 portal.  I saw a giant robot with flaming hands and a crazy swirling melty magic thing of fire swirls called Serendipity.  There was a Pink Floyd movie show at the portal entrance (4:00 and Esplanade, which will probably only make sense to those who've been in BRC) and I sort of had wanted to go but not alone.  It was 10:30 by then and the show wasn't starting til 11, so I went back to see if Connor was maybe up for going.  He'd had a few drinks and I didn't feel like pulling him out of that so I sat with him and one of our neighbours for a while chatting.  Turns out the ones to the left of us weren't as frat-boy-ish as first appearances would have suggested and this guy was a Canadian (yay!) living in San Fransisco and the three of us chatted until his three Spanish speaking buddies came back.  They were fun and lively and I went to bed happy that I wasn't, in fact, surrounded by dolts on both sides.  Now I had the fun guys one one side, the cool chicks and George behind us and the awesome older burners two down from us.

The story about the guy who got caught up in his bike brought back SUCH a strong childhood memory... I would have been about 5 years old, and my brother 8. He had an Action Man parachutist (our equivalent of GI Joe?), and had the parachute tied to the back of his bike.