I think I've noticed a pattern the last few weekends, but haven't really done much about it.... 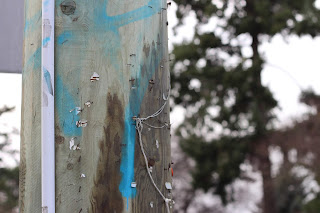 See, come weekends, I'm so happy to just sit and chill and relax.  And because of this sort of sense of ahhhhh, I'm generally not in the mood to cook.

So often, come Friday night I'm like, bah.. I don't want to pick up groceries on the way home I'll just have... popcorn... or something equally "easy" but, so not food or protein source or good.

And then that will sometimes repeat on Saturday and Sunday, where I'll have toast instead of my weekday breakfast, or I'll have breakfast and then just kind of snack and ooh popcorn would be a nice treat (I've stopped the chips issue at least) and then I find that on the weekends I'm all blah and lethargic and blue.

Um... hello?  Shouldn't take a genius to put together the two and two of eating poorly and feeling poorly.  Ugh.  And yet... so many times the "lazy"... the relaxing wins out.  Not all the time, mind, but I've had some pretty blah Saturdays that had no reason to be so blah.

I also (I think I mentioned) hadn't been doing my mindfulness/meditation.  Probably for a couple of months.  Maybe even when things got really hard with Jason and I?  I don't know, I just know I've been avoiding it or something.  So last week I made the time and like I said, it probably helped and certainly didn't hurt.

And then last night I didn't do it.  I don't know why... watched one too many shows or noodled around on the internet for an hour two long or something and then I just wanted to go to bed rather than spend another hour trying to calm my mind.  (Because it's not an easy process, it takes effort... even if it ends with a calmer me...)  And I didn't have a good time falling asleep.  Could be just coincidence, or it could be that I do actually sleep better when I've done mindfulness that evening.... certainly I'll be doing it tonight to see how my sleeping goes.

I've also had weird dreams these last few weeks... or month maybe, I'm not sure.  But, odd dreams that I want to remember but that slip away from me in the morning.  Slightly disturbing dreams, like Jason and I living near my parents and my parents witnessing him getting arrested because the sniffer dog (a beagle, go figure) was sent to find drugs in our house...  I remembered that one... it was from early this morning, and totally my fault for watching Sons of Anarchy before bed.  (We happened to "live" at the house where a gruesome scene in the episode took place...go figure.)

Anyway.  I'm frustrated with myself because I really like relaxing and not doing anything or having to do anything.  I even groaned Saturday morning when I realized I "had" to do laundry.  (Of course, I didn't have to do laundry, but it's the best, easiest time for me to do it... I just didn't want to.)

So I'm going to try to be more consistent with things I guess... because they do seem to help me feel better.

And I don't want to spend my down days feeling all blah.
Posted by Victoria at Monday, November 24, 2014

Suggestion...try making a bit more real food during the week and popping the leftovers in the fridge/freezer for the weekend. Now that it's the two of us with all the kids away at school, this works for us. We don't feel like cooking on the weekends either, but tossing something in the microwave is easy.

And this way you don't eat the same foods multiple days in a row.

Don't blame you for not wanting to feel blah...that's no fun. I spend too much of my time feeling like that too.

A good idea E. I have a menu plan that I'm meant to be following but it usually involves buying stuff for the weekend... I could pick something up Thursday if I know I'm *always* too tired on a Friday too I guess.

Preferable someone who'll work for hugs and cuddles, rather than an expensive wage.