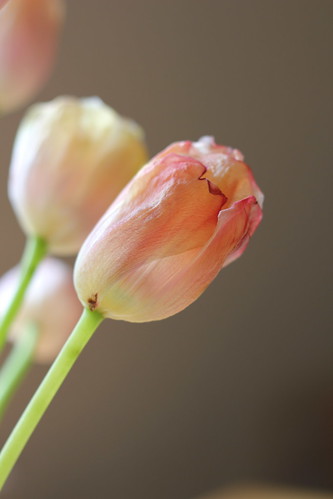 Jason and I were on a hidden little West Coast beach the other weekend hunting down cool photos.

This was one of those beaches that was a mix of rocks and logs and twigs and pebbles and as we were heading back out of the mini cove, I saw something I thought was a weird looking piece of plastic.

As we got closer and I debated untangling it from the branch it was wrapped up in Jason saw it too and said "don't touch that."

I went up to the thing and realized it wasn't man made, but some sort of... organic... material and upon closer inspection, we're pretty sure it was a giant (no longer alive mind you) jelly fish.

I mean, it didn't smell or anything, but it just wasn't right!  It was jelly looking but thick and seemed to have veins of some sort and was nasty gross looking.

Jason had warned me not to touch it but I asked him if I could poke it with a stick (I didn't want it to explode or anything) and ewwwwww it was gross.

It looked like it had come in with a high tide, been caught on the stick and perished when the tide went back out without it, but damn if it wasn't the weirdest looking blob of goo I've ever seen.

It was kind of like seeing the guts of something and made me wonder what happens to them when they die of natural causes...

Do they sink?  Get eaten?  Disintegrate?

Was some bird going to try to eat this goo blob or was it even edible?

I don't know, I made sure Jason took a photo and I kind of want to see if the photo he got looked like anything other than orangy brown jello with veins and plastic stretchy bits.

Gross. Much prefer the shores of the fresh water lakes around our place...safer. Still gross sometimes, but nothing that's going to hurt you.

Fair enough, although in lakes, I get weirded out by weeds and whatnot coming up at me from the bottom! ;)

On a related topic, I bet a baby jellyfish isn't so gross. Just imagine those wee little stingers!

I think baby anythings are probably cute, and just think of those wee little poisonous stings!