The Monday Morning (P.S. Here's A Duck, Because)

In the initial plans, Monday was the day of my first volunteer (work) shift.  It would have been my second morning and third day on playa.  But, that ship had sailed, and I was excited to know that I was going to be there TODAY!  I'd made it.  Like, really, this was more of a nervous excitement.  I was vaguely aware of the road ahead... gas was the biggest concern (more for the trip back, really) and then there was the curvy, windy mountain areas that I recalled from previous trips and was nervous about.  But I was nearly there.  I could taste it.  It was all going to be ok.... I was almost there! 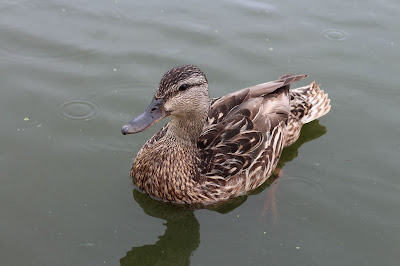 I didn't have a good night's sleep (not unexpectedly) and was up early early (before dawn), getting myself ready to go.  I messaged Jason that I was on the road, but he was still asleep (or so I hoped, it wasn't even 6 yet) so I was oddly on my own.  I could just see the beginnings of light on the horizon as I put my travel bag into the van and settled myself for the trip.  I went through my usual starting-her-in-the-morning drama (two starts and a loooooong wait to get her fully engaged) and I pulled out of the parking lot.  I had a full tank, no one was going to be on the road, I'd probably hit playa before noon, missing the worst of the heat, and hopefully I'd have a quick entry.

I stopped on the side street, indicating to go left, checked for traffic and slowly pulled out onto main street

I tried to start her again.  Nothing.  Not a thing.  Not even a click.  Crap.

Jason had told me to call him FIRST if anything went wrong with the van, but I was part way into the intersection, so BCAA had to be the first call.  F*ck.

There was the panic.  Because now what?  I had a dead vehicle.  I wasn't going to get to Burning Man after all.  F*ck, f*ck, f*ck.

Got through to BCAA (AAA in the states actually) and said that I was safe (I'd grabbed my purse and gotten out of the vehicle and was standing on the side of the road feeling stupid for ever having taken such an old vehicle) but that the vehicle wasn't and they said they'd make my call a priority.  (Turns out there is only one tow truck in the area, but I don't know how these things work or if he was already awake or what....)  So I texted Jason.  And then called.  And called.  No answer.  I called his landline, sorry to wake up his roommate but hey, this was kind of an emergency.  No answer.  I texted the roommate... nothing.  And then the police arrived.  OH NO!

But they were very nice.  Had me put it in neutral and "steer" while they pushed it out of the intersection and to the side of the side street.  Asked if I needed anything and I said, no, just that I needed a cry.  They left, and I cried.  Sat in my van and cried.  Why had this happened?  How unfair was this?  The first time I'd felt ok about getting on the road and she died on me.  Dead dead died.  And Jason wasn't even there for me to consult.  And no way I was going to try starting her again, who knew what was going on.  Plus it was freezing, and all I had was my blanket jacket thing I'd bought for the playa, but I put it on and waited.

It really didn't take too long for the tow truck to arrive and he was very kind, and of COURSE she started right back up (Jason said after that perhaps I'd been so frightened I hadn't put her back into park when trying to start her again and I think that's probably what happened but still....)  He offered to drive ahead of me to the mechanics and I took him up on the offer.  I didn't feel safe driving her where I had to go (over that hilly pass and then into no man's land with nothing around and little to no cell service) and I wanted a mechanic to look it over and then I guess I would just go back home.  This sucked.

I sat and half dozed in the front seat for about an hour until the time the tow driver had told me they would open.  I knocked and went in and got told that it'd be another half hour at least until the mechanics showed up, so I went back to my seat and kept trying to contact Jason, getting more and more upset that he wasn't answering.  His roommate picked up the second time I called and said he wasn't actually home at all.  Which made me even more upset.  How was he supposed to be my support and car go-to person when he wasn't even at the one place I was able to contact him at... and didn't even have his phone turned on.  He wasn't there and I really really needed him.  He'd made me promise not to let a mechanic do anything to the van before talking to him, and now I didn't have that option.  I was going to screw up, somehow.

The mechanic (again, super nice guy) came out and talked to me and had me explain what happened and what I'd noticed and I told him the starting issues but that this was the first time she'd died died.  He said he'd take a look but had some suspicions and I told him to just do what he thought was best.

I gave him my number and headed back to the hotel.  I told them I'd already checked out, but that my vehicle had broken down and could I go back to my room until check out time?  (Eleven)  They were good and let me back in and I just kind of flopped down on the bed.  F*ck.  I wasn't going to Burning Man...

At some point I got through to Jason.  Apparently his phone had died died.  As in not ran out of juice (as I'd thought) but completely died, call to the cell provider kind of dead and he'd only just gotten home and managed to get it back to life somehow.  He was angry about that and hadn't been brought up to speed by his roommate apparently, because I had to break it to him that I had a dead vehicle and that the van was in the mechanic and I was screwed.

And, of course, I'd screwed up.  The things the mechanic had said he was doing were not what Jason would do and now he didn't know what was going on.  This didn't help.  So I gave him the number for the shop and told him to call.  Seems him and the guy had a good talk and the guy hadn't done whatever things he'd been going to do and Jason was back to being ok with "his" engine..... but I wasn't.

I didn't know how much it would all cost or how long it would take but I figured the trip was over and I'd be limping home somehow.  At some point.

It was yet another disastrous day on what was turning out to be the worst trip ever and I was clearly not meant to be going to Burning Man this year.

At least I could lie in a hotel bed for a few hours before I was totally screwed, right?
Posted by Victoria at Friday, October 07, 2016

(that's all I can manage)