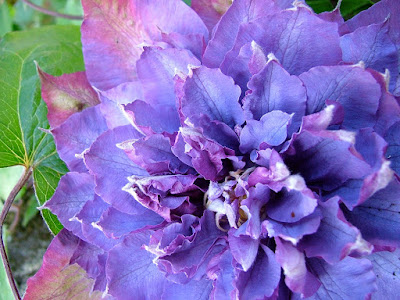 Ah ha (she says, before knowing if it actually works the way she thinks it will...) look, a photo!

(Fiddles around with it in the "compose post" window and hopes for the best when it actually publishes.)

I still haven't sorted out my flickr account... at this point it's looking like I'll just have to suck it up and pay for another year of Pro to literally buy myself the time to keep hacking away at deleting and tidying.  I know there's been mumblings of not complaining about something that's free, but the thing is I've been with flickr a long time.  I paid for a Pro account for a long time too.  And I really enjoyed flickr and the community of photographers (and bloggers!) there.  Then they were bought and sold and bought and sold (or something like that) and things changed pretty dramatically.  I started to get less interaction and actual spam.  And then porn spam.  (Yep, it's a thing apparently)  And then one of the new owners said that they would give a ridiculous amount of photo storage for free and the combo of that and the decline in interaction made me no longer feel like paying.  Plus I'd opened a new account that was slightly less anonymous and so this particular account was just for my blogging.  So my frustration is, as I've said, the "well, I've been around a long time and put up with a lot and it kind of now feels unfair" sort of feeling.  Plus, I'm not really using the service actively anymore (as in I haven't uploaded photos in years) but I do understand what the new owners are trying to do (hint: make, not lose money) and it's one of those "it is what it is" kind of situations.

I think I figured out how to not triple post photos.  It's a little complicated probably, but as I download the photos I'm removing from the account, I'll store them in a folder... and then once I've used them (for the not so secret second time!) here, I'll move them into a different folder and store them on a hard drive.  I'm sure it's not the smartest/bestest idea but it's the one I have so that's what's happening!

The photos will likely not match, just be more of that visual break I've really missed.  But some of them may have a story.  That I may or may not remember, or tell.

This photo I seem to remember is one of the first few I took with this new fangled thing they called a "digital" camera.

I remember talking to a guy in a camera store who told me it was just a fad and not going to take off.

Well...er... I mean I still shoot with film and hope to always do so as it just feels different and my brain shoots differently on film, but, well, digital totally did take off and now my phone is a camera too, you know!

So yeah, long story short, this is/was a test post to see if I've figured out how to upload a photo rather than linking it from flickr and hopefully it doesn't give away my first born child's home address or my bank account information or anything like that!