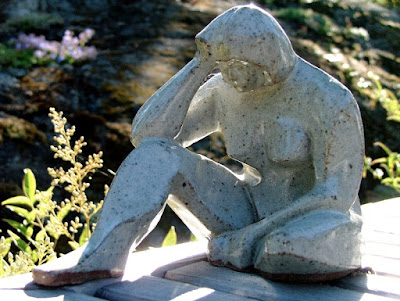 So, this is a visual representation of me hitting my hand against my forehead because bugger.... I done gone goofed up y'all!

In my ongoing attempts to pare down my flickr account to what's allowable for a free account under new management, I figured out a system to move photos off of the blog, then replace them with a static (non linked) photo and then delete that photo from flickr, saving me one (ONE, muwaahahahahah.... a la Count from Sesame Street) photo space.... several hundred more to go.  (sigh)

Then there was a semi system of using photos on the blog again, so I was using photos I'd "downloaded" in my one by one process.  And then storing them externally and therefore not reusing them.  It was working fine, if a slow moving process.

But theeennnnnnnn, I noticed that flickr has a download thing where you can download albums so I figured I'd do that as a backup sort of thing and it wasn't as organized as I might have been and so I didn't pay that much (enough) attention and so I downloaded a few albums and then I started trying to organize but they had no names so I didn't remember which albums I'd downloaded so I figured I'd just download them all again from scratch but some photos are/were in more than one album and oh crud... what about my "put it on the blog" system?

So I kind of goofed up a bit and, again, this will likely only annoy me but I'm probably going to end up doubling photos here because I screwed up the simple system I had and now I don't have a system.

I still can work through taking photos off the blog and replacing them with the non-link (and then removing from flickr.)  All that is still workable and simple enough (if slow!)  But now I don't have a clear system for taking photos from flickr and using them here.

So there will be doubles.  The seven of us who are still here just won't notice, right?  Right!  Goooooooo team!

I came to the realisation a little while ago that including photos was more hassle than it was worth, so completely did away with them.

I did for a while, but missed the visual.

I appreciate your effort, particularly since your photographic eye is really, really good.

Thanks. And feel free to write a strongly worded letter to management if/when the photos repeat! ;)