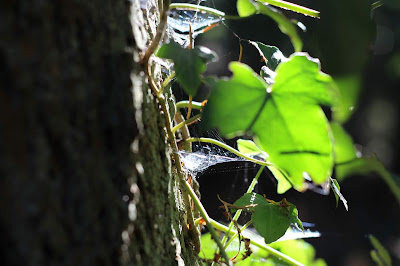 Well, it's Monday.  And how do I know that?  Quite simply because I'm setting this post to publish/post on Monday, so it'll be a Monday when it goes out into the world.  That's how.

Other than that, I am starting to really lose track of days here.

I mean yes and no.  More like they're all sort of starting to blend together?  Was it yesterday I walked in the park or was that two days ago?  Three maybe?  And it was cloudy and rainy yesterday, right?  When was it sunny?

The only appointments I have anymore are counselling (video) and then waiting for deliveries on whatever day they're coming.  It's... strange and unsettling and, well, different.  So, weird.

As I said in some post last week, I haven't been into a store in coming up two weeks.  As in, nearly fourteen days since I was in public.  I've still seen people... at a distance... in passing.  I've had a conversation or two... at a distance.  One with the grocery delivery fellow, and one with C-Dawg who dropped me off some home made gluten free cookies and a book.  (I have the best people, I really do)

So, yeah, I've started getting grocery deliveries.  First time in my life.  I'm aware I could go into stores and take precautions but I suppose I'm extra extra freaked and nervous and so I'm going to try delivery as long as I'm able and it works.  I'm trying not to be a strain on the system, and so it's hard to adjust my brain to thinking ahead to what I might need ten days from now, but I'm trying.... I'm also a little embarrassed that someone might notice the comfort food I ordered amongst the fruit and veg and healthy things.

I also put in an order from London Drugs (think... everything *but* grocery store) and that too was strange.  I'm not one to really run low on things, I usually always buy before I run out completely, but there are a few things I hadn't realized I was running low on when I did my last few shops.  Like... face wash, and shampoo, and er, razors.  And yes, I know I could *just* glove up and be careful and go to the store, but I'm really not wanting to.... anxiety or not, so I'm ordering and dealing with delivery, but it's strange, not just thinking "oh, I can pop out and get that whenever".  Because, no, they're asking us not to do that, and I'd really rather not if I can avoid it.

But it's taking some adjusting to and re-wiring of how my brain works.  I suppose I'm turning more to the mindset of someone who lives far from a "town" and just does a "big shop" once in a while so has to pay a bit more attention to things.  Like what I imagine the olden days were like... when you drove the horse and buggy into the mercantile in town and put in your order and, yeah... a bit more like that.  But... with computers and credit cards and trucks and "it's outside the door for you" and I just.... this is so strange.  But you know that.  It's not just me dealing with all this.

Which is somehow even stranger.
Posted by Victoria at Monday, March 30, 2020