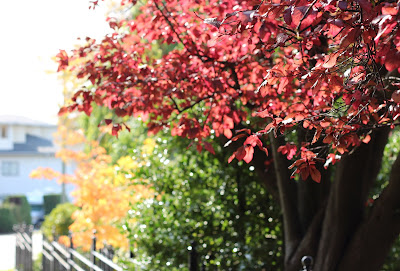 Ok, if you're like me and so done with reading about the virus-pandemic just skip this post.  And maybe some others.  I mean, I'd not be reading my blog once I saw it was about this (but maybe I secretly would while telling myself I didn't want to be doing this!)

What a stupid week this was here (in town).  Just... *swear word*.  Like, I actually want to use swear words here but I usually don't but that tells you my level of .... ARGH with everything.

It sucks sucks sucks having anxiety right now, let me tell you, because it is making an unusual situation REALLY DIFFICULT.

So at some point last week-ish, the health people announced that we had our first case of Covid19 on the Island.  Now, mind you, they didn't say where, they just said *waves arms around* here.  And it feels like everyone assumed it was their damn neighbour because the panic feeling rose in the city exponentially.

And if you remember, I hate that feeling.  I shop for Christmas in October and then I avoid the stores because everyone's all AAAAAAAHHHHHHH and I just can not handle that feeling.  Like *swear word*.

And so, this week I've started seeing folks in their full protective gear (masks and gloves and a layer of fear) for the first time and again I AM NO EXPERT but COME ON!

I'm really trying not to judge people and I'm reminding myself that everyone's going to react with a range of feelings around this but the masks are for those who are ill, or those with compromised immune systems I suppose, and they keep saying, and have been saying for a while "please stop with the masks?"

And I suppose it upsets me more than it should because it sets off an anxiety thing in me that is like OMG IT'S THE END OF THE WORLD and then I'm dealing with my regular anxiety (which is currently higher than usual) and this unnecessary anxiety because it's not like this particular anxiety is all that smart it just reacts, cave man style.  Like.... OTHER HUMAN IS SCARED I SHOULD BE SCARED RAWR.  And then I have to manage that anxiety on top of whatever else it was I was doing (buying printer paper and creme eggs, shhhh, I know, I shouldn't with the eggs but COME ON!)

So, yeah, then this week I found myself in a place of "well I'm not going into 'Christmas energy'" stores but I kind of need, like, celery?

And then I looked in my cupboards and thought "damn... they're a little empty" so I went on Saturday morning at like 8:30 am (I KNOW, RIGHT?????) and bought me some extra.... stuff.  Like I filled up on Oatmeal a little sooner than necessary and a few cans of stuff and well my gluten free bread was on sale so I bought two of those and then it's like... ok, what's happening now?

Because people around here... I'm not even sure they're thinking things through.  Why am I buying stuff?  Because if I *do* get sick and then have to stay home for an extra while, I should probably have some stuff I can heat up or cook for myself without having to go get groceries.  And I'm usually pretty good at having that around, but I got slack for a while there because... and here's the irony... I haven't really gotten all that sick in a long while (KNOCK ON WOOD).

I'm really really not trying to put people down, I'm not, but I'm frustrated.  I've heard tell of folks who have purchased a significantly large amount of toilet paper.  What are they going to do with that?  Will this not cause a dip in toilet paper purchasing several months down the road when people still are using up the rolls they bought.... let's be honest, without even knowing why they bought it at the time?

Like, I'm scared of this social herd monkey see monkey do stuff!

It reminds me of a game a friend and I played in downtown Vancouver when we were teens.  We'd heard about it and it was harmless and so we wanted to try it.  We stopped on the sidewalk of Robson (think busy, popular shopping street) and she pointed at something "up on the roof" level.  I nodded and pointed too and we pretended there was something interesting to look at, wow!  Very quickly others stopped to look too.  Now, neither of us were actual pranksters so we giggle and walked away pretty quickly but it was an interesting example of humans and how we follow each other.

And that's 100% what has happened with some of the "panic buying" of stuff here.  People hear about it and they think "hmmm, there must be a reason, I should do it too"  or "well, I don't want to run out" or... whatever.  (I mean, I said from the start, you don't actually NEED toilet paper you know!) And then people started posting on social media about it and the news talked about it and it just kept going.  I mean, I had enough toilet paper and I know that you can deal with not having toilet paper, and yet I still bought a small pack a week or two ago because a) I kind of wanted to be able to say I did amidst all the weirdness and b) I thought it might get crazy and so I should have some extra as a just in case people got bonkers and I wanted some.  So even me, not freaking out was affected by the weirdness and bought some earlier than I normally would have.

It's weird and it's frightening and as I've been saying to people, and people have been saying the same to me, it's not really the illness I'm afraid of, it's how people are reacting and acting right now!

I really really really hope that the anxiety and fear out there around all this dies down because I'm having a hard time with that, but my anxiety is afraid that it won't and that things may feel like this for a while.  I mean, at least shopping gets less crazy after the New Year.... there's just no particular date in sight here, so it's hard to know what to "look forward" to as a "calmer days" end time.