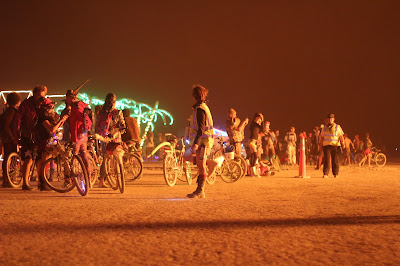 Jason helped me buy a used bike this weekend.

As in, Jason's been looking online for me for months and then this weekend we drove out to see one that was within my budget ($150 smackaroonies or less) and he looked at it and all I really did was take the cash out of the bank, so, yeah, Jason bought me a used bike this weekend and I just was the money person.

Jason's a bike person.  I have a few friends that are, actually, and he enjoys fixing them or tuning them or whatever we call it, so he's going to help me fix up this bike a little so I can hopefully get out riding a bit more.

I have a bike already, it's the one I bought for Burning Man and it's a heavy, solid mountain bike and I love it, but I'm also kind of obsessed, anxiously speaking, about losing the spot for it in the tiny little bike lockup my building has and well, I just never ride it.  (Photo from either my first or second burn, at a "regional burn" which if memory serves, was from Reno, and possibly a wooden "facebook thumbs up").

I've talked with Jason about the bike I grew up on, a black BMX, and how much I loved riding.  You could just... go places.  It was freedom.  And we biked everywhere as kids, and I loved doing that and it was fast to get places, and it always just felt good.  And when there was an empty lot at the top of our street for... years?  (who knows) we'd ride our bikes around that and it felt like jumps and ramps and so super cool and I talked with Jason about all that and how I kind of thought I'd like another BMX.  So that's what he'd been looking for and that's what I now have.

Jason then showed me all the sites for customizing your BMX and um, well, yeah... it's crazy!  And fun.  You can get customized and coloured everything... You want a purple chain?  Ok!  How about bright yellow pedals!?  You can even get a coloured topper thing for the... thing that you pump the air in.  You know, the tube thingy?  Valve?  You could get one that's a die, or a skull or just, purple?  It's crazy.

My hope is that having a lighter, easier to manipulate bike, will have me out riding more.  Vs not at all.... that's the hope anyway.  It'll have to live in my apartment, which I'm not thrilled about (right now it's at Jason's so he can work on it a bit) but I'll figure it out.  There's no room in the bike locker, and bikes locked up outside around here get stolen so... just is what it is.  And I've told myself that if I ride it a few times, I can buy some customized fun things for it.  And if I don't, Jason says he'll help me sell it to someone who will use it, as he says it's a good little bike.

So, yeah.  Bike.  Me.  Hopefully using it and getting fitter and healthier and enjoying it.  (Safely!!!)