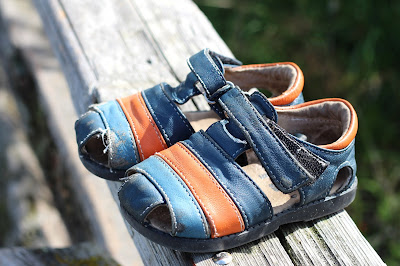 Right now when I go to my front door, there is a pile of things on the little table there that have never been there before.

There are gloves, both cotton (washable and reusable) and disposable.  There are masks, both "paper" and cloth, with N95s in a cupboard nearby.  And there are handkerchiefs.  Which I use to open doors and things rather than gloves, and then I throw in a bag to be washed later.  (I tie died some of them, it makes me smile to see.)

I mention this, because I look forward to the day when I don't have these things by the door anymore.

And no, I don't go out much, but I have them.... was able to buy them in the last month or two (there was a rush on them in the early days) and I use them when I need to.

But yeah, there's a pile of things on the little table by my door that have never been there before.

Photo of cute little shoes as a happy distraction.  That photo got titled "awwwwww!"
Posted by Victoria at Friday, July 17, 2020