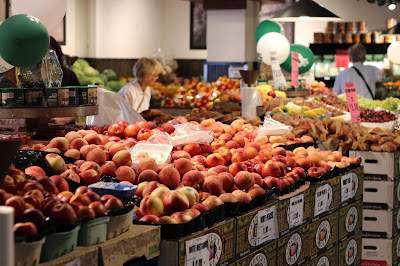 I was going to say something about it being mid August but then I glanced over at the calendar and, well, seems we're at the end of August.  Really not sure how that one happened, except maybe by me trying to lay low and survive the hot days I missed the time passing or something?

Not that end of August means end of heat.  We often have warm, even hot days into September.  But still... the end of Summer is in sight, eh?  I noticed a shorter day the other day... I know they've been getting shorter for a while now but the other night I noticed it was dusk at 8:30 rather than at 9:30, or those glorious days closer to 10...

It's funny, it wasn't really until I started travelling to Nevada at the end of August that I realized I live somewhere where Summer evenings really are longer.  Something something equator and all that jazz.

I also started noticing how quickly the length of days shorten once I started doing that trip.  It always felt like in the ten or twelve days I was gone, by the time I got back home (first week of September) the days were "suddenly" shorter.  Which probably is only so true.  But still.  I noticed that.  And I noticed the dampness in the air.  We called it "the ocean smell" on our first trip back, but it often felt like there was some threshold heading into Northern Oregon and Washingon where the rains would hit us.  And re-rust Connor's truck.  And turn the playa dust on our bikes to a rust-creating mess.  Air's "damper" up here.  And then, yeah, you eventually hit the coast and having spent a week in the desert, you can smell the ocean.

It's always a bit jarring.

This wasn't intended to be a post about Burning Man but it's that time of year and it's not happening this year.  Or, as they'd like to say, it's happening virtually.  Online.  Not my thing, but hey, I hope those who "go" virtually (what do you call that like 3D thing you have to buy goggles for?) enjoy it.  I'm sure many will.  I'm on my fourth year of not going, so for me missing it is more normal than for those who have never missed.  But enough about that.

Time is passing.  I am holding back a lot of anxiety about the future and Fall.  Not just about the pandemic, but certainly about elections and yes, the medical system and just.... all of everything.  I don't currently feel I have anything to look forward to, and I'm already trying to figure out how to not stress about gifts at Christmas time since I'm 100% assuming we won't be gathering as a family at all at that time.  F*ck, I shouldn't have mentioned that.  Now I'm stressed and upset and let's just go back to talking about Summer and the length of days, ok?

It's still Summer.  For a while.  Passing quickly though, no?
Posted by Victoria at Friday, August 28, 2020

I'm not going to acknowledge the days getting shorter. Not yet. The months getting shorter, sure. I mean, August felt like it had a week shaved off somewhere. Daylight Savings Month?