I got a new neighbour recently and they have never lived in an apartment before.  I know this, because I've had to interact with them and they have now let me know several times that apartment living isn't for them, but they're sticking around "for now". 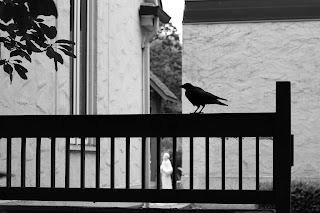 The reason I've had to interact with them is speaker noise.  Theirs.  Sigh.

When I first moved into this building, we had a resident manager.  Which was lovely, because when the person helping to take care of the building lives IN the building, they have an actual understanding of what it's like to be in the building and the little things (especially in an older building) that you kind of have to be aware of to be a "good" neighbour.  When I first moved in the older gentleman who was the resident manager told me that I was "not allowed" to have speakers on the floor, or attached to walls.  "They reverberate too much" he said.  And so I got speaker stands.  Eventually the building changed hands and we lost our resident manager and have someone who lives elsewhere.

When I got this new neighbour (was it January?  something like that) I started  getting loud bass noises up through my floor.  Like think Charlie Brown's teacher noises but deep and low and reverberating.  I'd never had this with the couple who lived there before me, I never even heard their tv, but now I was hearing this deep low rumbling.  Honestly, it was hard to tell if it was radio, tv, music, just... it was frustrating.  After one particular day when I could feel my couch vibrating with the sound, I sent a message to my building manager.  I said hey, could she maybe let new neighbour know that this building is quite old and that they may not realize how much sound travels and a reminder not to have speakers on floors/walls, etc.  I ASSUMED this would be done privately, but the next day I got a pounding on my door and there (standing at a distance because covid!) was my new neighbour, small speaker in hand, unhappy look on face.  "This is the speaker, it's tiny, no way you're hearing this!"

And, well, long story short we talked for a while, calmly and in a friendly manner and neighbour wondered if it was when they were putting the speaker in certain spots (like their central kitchen "counter") or on their outside deck.  Neighbour also asked why I hadn't just talked to them myself and I said well a) I'm conflict avoidance.  "THIS ISN'T CONFLICT" they said... I shrugged.  I also said that b) it's covid, and I'm staying away from people.  (This was early days, like March/April maybe?)  Neighbour also asked me if I had a kid.  No.  Did I have a small trampoline?  No.  Well apparently my "walking on the spot" that I sometimes do for exercise in my kitchen bothers neighbour as they can hear it.  And the toddler from two floors up echos when running around their place and it bothers neighbour and, well, that's apartment living..... you know???  Anyway,  I suggested we exchange phone numbers and, well, I have not actually used that phone number to complain about the noise vibration that, for example, I AM DEALING WITH RIGHT NOW.

Because every time I see that neighbour now they tell me how they hate it here and how they didn't move to this town to retire to be told to turn the music down by a neighbour (sigh).  I am not bothering to point out that I didn't say that, I just asked that it was pointed out that sounds vibrate and travel a lot and so you have to be mindful of where your speakers are.

So I'm writing this post instead.  I am avoiding pissing off said pissed of neighbour yet again and hoping they stop listening to... whatever Charlie Brown deep bass thing they are listening to.

And, no, I'm not stomping when I do my "exercise", I'm pretty damn quiet, and now I'm even sensitive about that.  Sigh.

This is why I generally don't say anything about anything to anyone.  Ugh.

Posted by Victoria at Wednesday, September 16, 2020

Apartment living. One of my neighbours plays piano. Which is better than when I had the upstairs neighbour who was teaching bongos. The the guy who was learning the didgeridoo. Or when the "up with people" group (like a dozen young folks) were shacked up in the place under me for a summer. Or the really stinky weed that other neighbour smoked for a summer. Or the couple that legitimately fought tooth and nail every few days.

Or the guy who, based on the "Oh god, oh god, oh gods." that would come through our shared wall at 2 or 3am was was God's gift to women...

Well, hopefully its not all karma from when I didn't realize I had my sub-woofer backwards and was rattling my building managers pictures off his wall...

(And I'm sure you've more than paid of that accidental karma by now!!)