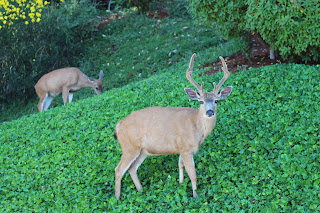 I was driving home the other night (in the dark, because... yeah, equinox and all) and I had to nearly stop (as in I slowed right down) for a dog on the loose crossing the street (near a crosswalk which was cute) and it was such an odd thing.   (I considered stopping to see if it needed help but it seemed pretty determined and like it knew where it was going and I'm not sure it would have approached me anyway, it seemed like it was fine rather than scared and lost.)

I was driving back from Jason's neighbourhood where I'm alert to cats roaming at night, but it struck me that I'd not seen a dog out on its own and that that's not something common around here (I know it is in other parts of the world).  I keep my eyes open for cats... deer for sure (in other areas), but dogs?  Yeah, that was a new one.  Weird.  Hope pupper found his/her way home!

I'm glad you clarified about the pic, because I was afraid the "dog" you saw was a bit big.