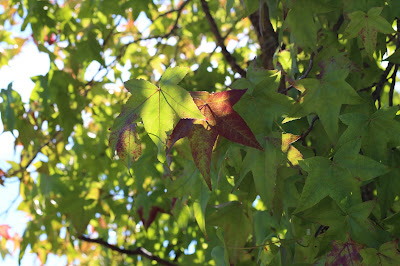 I'm not entirely sure how to explain this, so the easiest way to say it is that I realize I'm forgetting things.

Specifically, I mean things from my youth and childhood.  Details.  Stories.  How things went, what happened.  Memories and recollections I honestly thought would just always be there... because I lived them, and experienced them.

And I would imagine this is normal and just what happens as you continue to age and make more... newer memories and I'm not saying that I think I have a memory issue exactly... just that I'm sad that I am no longer entirely certain about things.

I can't remember (sigh, ha) exactly what it was that prompted this realization and thought but I think I was having a conversation with Jason about something "when we were kids" and I tried to recall an event and it was too fuzzy.

I've been saying for a while now that some of the things I'm taking for anxiety and such smudge my memory.  I mentioned this to a couple of friends and they laughed it off saying that was just us getting older, but I don't know.  Again, I'm not worried about a memory issue, I just do not like this feeling of loss.  Loss of ME and my stories.  I suppose I'm wishing I'd kept my diaries (I got rid of them all at some point) even though I know many of them wouldn't have been about the day to day and more about my FEEEEELLLLINGSSSSSSSSS.  I'm sure I could start writing down said stories and events and recollections now, but there's already that seed of doubt... am I remembering this accurately?

Some things are seared into my brain.  (Or are they?) And there are things that I swear I can still *feel* from when I was a kid, or "young adult" or whatever.  But I wish I still had crystal clear recollection of more things than I feel like I do right now.  Is this just another kind of crap thing I'm supposed to accept about getting older?

I feel like this is a function of the brain trying to make room for useless new information, like how many episodes of Orange is the New Black you have left to watch in 2nd season or where you local polling station is for the upcoming election.

I think it's why as you get older, you start to resent people trying to teach you new things or changing how your iPhone works, darn it.