(So first of all I stole this photo from a local online paper, the Times Colonist, and the caption said it was taken by ﻿Douglas Pynn, so thanks and sorry!?) 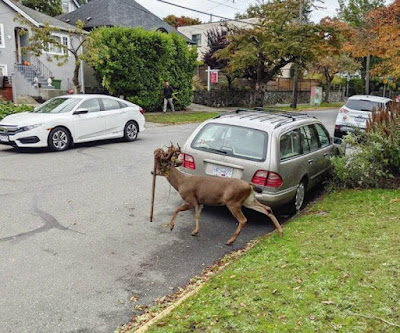 A month (?) or so ago, I read a thread on a local online group about what that person called "hipster deer" who had random things stuck in their antlers.  It was a little funny but also a little "dude, how?" and I thought nothing more of it... we have a lot of deer around these parts.  (Like, a lot... apparently.)

Fast forward a few weeks and I was driving home one night and who/what did I see but that very deer and this time it was less amusing and more.. concerning?

Because this time I could more clearly see that as well as whatever was stuck in his antlers, there was also a... a.... stick??? Pole?  Post?  that was stuck and nearly touching the ground and probably something not delightful for the poor fellow... see photo... thanks Douglas.

It was a couple of weeks after I saw the deer in person that the newspaper ran a story about it, and the other "rutting deer" (a nice way of saying totally horny and wanting to fight and er... be intimate! with lady deer).  It said that yes, the local authorities had gotten lots of calls about these young (usually) males with stuff entangled in their antlers but that there wasn't much they could do about it unless the buck was so entangled it wasn't wandering around and actually stuck.  So the powers that be are aware, and monitoring (to the best of their ability) and doing what they safely can if/when they can but man... I feel bad for the dude with the post/stick attached to his head!  Unless he thinks it's some kind of additional antler and it's giving him deer status, I dunno!

Anyway, I saw the famous deer before it was famous, that makes me famous right?  Like totally maaaaan!