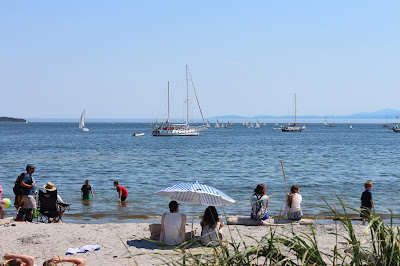 I keep seeing a tweet or a meme going around that says, like "how can March be next month when March was also last month" or something along those lines and I feel like I know exactly that feeling.
Last March just happened.  I swear.  Probably because it was so traumatic or frightening or unusual or different or difficult or strange or unexpected or like NOTHING ANY OF US HAD EVER EXPERIENCED BEFORE or all of the above.  It maybe got seared into our brains in a way we didn't recognize fully at the time but March was just here.  Like... just.  So how is it it's a full year ago?  How?  Sure, I remember some of the moments of that span of time.

George Floyd and BLM.  My Covid test.  Summer and heat.  Birthdays at a distance.  Backyard distant visit with a friend.  The American election.  (We had one here too, a byelection, but I voted by mail and kind of forgot about it).  The American... other stuff.... insurrection.  All the upset.  Bad months.  October was awful.  January was really hard.  Oh, right, Christmas, and my birthday and we just finished talking about Valentine's day right?  So I KNOW all these things happened, I was there, I remember them, but the year that has apparently just passed doesn't feel like a year.  It just doesn't.

And when the snow started to melt and get rained away this last while I got a little sad.  That's really the last of Winter.  And honestly, we had a super mild winter here, we really did.  We had a couple of cold stretches and this last one had snow (the one previous snow fall was really patchy) and now it won't get cold again for months.  It's Spring now.  I'm not saying it's warm and sunny, I'm saying that's it for Winter.  We're on the warming path now.  The flip side.  The days even turned around mid December, you know?  But yeah, once February is over, we don't get those freezing days.  We can have cold days or wet days or chilly days but not like we just had.  We may even get a dusting of snow in Spring, but Winter is over.  And that made me sad.  We skipped Winter and while that's ok it's also a reminder of time passing.

Plus I'm already getting anxious about Summer heat and do you know how annoying it is that part of my brain does that?  Anticipates future bad?  Future discomfort?  GAH I hate it.  I do.  So I tell myself to just focus on now.  Focus on how the weather is now and maybe tomorrow or this week.  Sigh.

I don't want February to be over.  Even though the "winter months" are often my hardest of the year, there are things coming up for me and my life in Spring that I am scared about and so I'm wishing time would slow... or something.