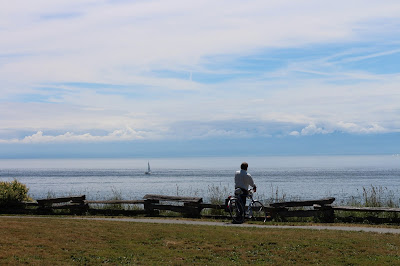 Well I seem to have gotten a decent night's sleep and woken up surprisingly well (for the first time since.... you know what!) so I'm in a far better mood than I have been, which is such a nice change, really.

I've been wanting to write about how anxious I am about Covid right now.  About the vaccine, about the rising rates, about the differing choices people are making, but I've been too grumpy and upset and anxious to write about it (ironically.)  Or I suppose, I could have written about it but I didn't want to be so so dark and anxious.  So, seeing as I'm a little lighter in mood today, and the province has announced a few changes (as of yesterday) maybe I'll give it a go.

I am, for the first time in my life that I can remember, nervous about a vaccine.  It's mainly because everyone's talking about getting theirs and their arm hurt or they felt sick or whatever their reaction was and so it's way more in the forefront of my brain than any other vaccine.  Take the flu shot.  Usually if I hear anyone talking about it it's a friend or family and it's like yeah, felt fine, or yeah this year my arm hurt a bit.  Not... everyone on the entire internet talking about it! (Ok, exaggeration but still...)

I know the basics of how vaccines work, I'm not anxious about it for any reasons other than I don't feel like feeling unwell.  I've gained a bit of sort of, I don't know, medical/sickness dislike?  (not phobia, but strong desire to avoid...) over the past year or so of this pandemic.

But when fairly normal things get attached to anxiety for me that's when things get a bit tricky.

I'm not one to have fear around doctors, never have been.  I mean, I was hospitalized when I was a kidlet and even that didn't make me fear doctors (good job BC Children's hospital!!!)

I've been poked and prodded an blood taken and regular visits since I was a kid.  Not ever been an issue.  I mean, sure, not always delightful but never a fear.

For some reason, once I got unwell with the mental health stuff that I've been dealing with for a while now, I've started to really get anxious about going to the doctor.

I imagine it's some sort of association thing deep in the recesses of my mind, like "doctor said bad thing so doctor make bad thing!" like you know, a primitive response that isn't actually coherent or sensible.

There were times when my old doctor retired and the new doctor took over in a new location that I would have to ask Jason to drive me there because it was too overwhelming (anxiety wise) to drive myself (and I knew that wasn't safe) and so I'd ask for the driving and moral support to go.

And the appointments were always fine and as he drove me home I'd always think well, that wasn't worth getting upset about at all!  But nevertheless, I was.

I worked through that fear over a span of time and was doing pretty darn well and then Covid hit.

And yes, I spent too much time doing too much reading and I knew it but I kept doing it and so even though I don't have to drive to see my doctor, even having phone "meetings" with her stresses me out.  So I am aware there is some medical sort of anxiety stuff going on.

And so yes, I am anxious about the Covid vaccine, not because of any science issues, but just because of medical issues that I don't really have a strong handle on or understanding of.

And yes.... (she says for the third paragraph in a row) I am concerned about the state of Covid in our province right now, and it's weird to no longer be on similar pages with other countries.  Like I have many American friends on my feed and lots of them have been vaccinated or are in the process of it and I'm probably months away (unknown at this time but sooner than I had originally thought) and that feels weird.

And there's still the ongoing difference of opinion around what's "ok" to do and everyone's risk tolerance.

Like I know someone who eats in restaurants regularly (now closed for the time being) and another who is going to see friends outside (is currently allowed, same 9 friends) and people who are planning Summer camping or visits and I... am not there.

I am doing more than I did a year ago, but I'm starting to wonder about that.  And I wonder about double masking or am I really washing my hands as well as I could or should I be wearing that mask on the walk or am I far enough away from everyone and, well I know nothing's as simple as we might like it to be, you know?

The irrationality of the irrational anxiety is probably one of the most frustrating things about it.