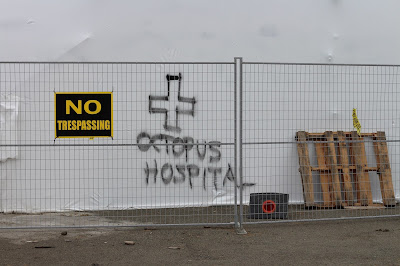 I remember when my friend's husband left her very suddenly, and unexpectedly.

She was floored, but was in a pretty tough, I'm going to get through this mode.  I felt pretty helpless, and I called up her parents to ask if they knew of anything I could do to help.

They said they'd let me know, and then her Mom took the phone into the other room to speak with me privately.

"Don't say anything bad about him," she cautioned.  "They split up once before, years ago, and then got back together and she had a hard time with the things people said against him, so don't do it."

And, after a while, and a lot of counselling, they did get back together.  Gave it another try.  She really wanted it to work.

But it didn't.  And now they're fully, completely split.  Forever.

But that's not the point.

The point is, that I get it.

I get that you want to hold on to all the great times you had together, and put aside the not so great ones as "just life".

I get trying to make it work.

And I get how hard it is to do that when you feel embarrassed to be trying again with this person who's treated you poorly.  Because that's what everyone sees and remembers and wonders about.

Why are you giving them a second chance?

Because you love them.
Posted by Victoria at Wednesday, July 03, 2013

People at their very core are complex mixes of good.. bad.. great.. and shit. We all have our shining moments & our not to proud of moments. I give credit to those who can keep trying & forgive, I'm very cut and dried once I turn away from someone. I believe in no regrets though, when I give advice I say, do what you know you will NEVER regret. That has led me to some of my best decisions.

That's all so true Sabrina...

I felt the same way when I got divorced, I hated it when people bad mouthed him (we just weren't meant to be - there was no cheating or anything).

We did not get back to together but I still didn't want to hear anything bad from others.

Do what your heart tells you, and as long as you do it with eyes WIDE open, knowing what you know and what can happen the good, the bad and the ugly, then you won't have any regrets.

I guess it's good to remember not to diss anyone's ex...

Yes, because in essence you maybe diss the persons love for them? Even though ex maybe an ass etc. it could be taken that wAy? Myself I never care if people chime in on what I've put out there as my truth. I don't like it when people said 'I never understood how or what you saw' that felt personal.. on my taking a chance on someone.. on my optimism to focus on his strengths rather than weakness.

I try to encourage my friends to listen to themselves.. and be true to what the know. I've had to learn it, and it has served me well. Mostly. Two marriages later :P