Not For The Squeamish 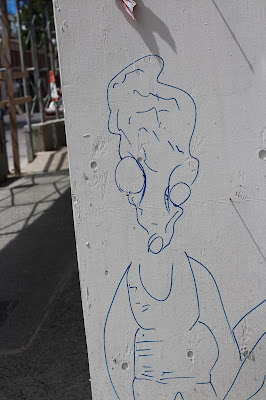 I'm going to talk about throwing up, so stop reading now if you're like me and hate everything about it.

I did not have a good Saturday night.

I mean, my Saturday had been fine.  A lazy morning, and then a few hours wandering up and down Moss Street for the Paint in.

I grabbed an ice cream for a very late lunch, and then came home and ate a sausage roll and strudel I'd picked up.  I had some delicious blueberries too, and then realized it was nearly four, and I hadn't had anything to drink that day.

I downed some water and had a little nap, and when I woke up I felt fine.  But then my head started to hurt a bit.

I had some more water and my leftovers from yesterday's lunch for dinner.  By eight or so, my head was really hurting and I could see that I'd gotten a bit too much sun on my chest.

I took a Tylenol and headed to bed.  Usually when I have a headache, an advil or something will sort it right out but this wasn't helping.  And then I started to feel nauseated too.

I really really don't like feeling nauseated.  I really hate it.

But I'm also usually pretty good at sleeping it off.

But this time I wasn't sure I could and got a bowl for beside my bed, but after a few minutes I knew I wasn't going to be ok and I ended up heading to the bathroom where I did, in fact, throw up.

I can't remember the last time I threw up but it's so wrong.  It's such an unnatural feeling, so backwards and uncomfortable and unstoppable.

But I felt better afterwards, after I cleaned up, washed my face, and stopped shaking, so I took the bowl/bucket back to bed, downed a Gravol, and threw a cold cloth over my face to go to sleep.

Except I started feeling sick again, and, yup, sure enough, ended up back in the bathroom, throwing up all over again and feeling pretty miserable.

One of the things that was really really worrying me while I was feeling so ill was what I would do if this was happening at Burning Man.

What will I do if I feel that awful and I'm in my tent in the middle of a bunch of other crazy camping people who'll probably be loud and happy and partying and all I'll want to do is go home and feel better?

What will I do if I have to throw up and I can't make it to the... porta potties (omg)  or if I try to take a Gravol and throw it back up like I did the other night (and yes, I'm going to get the "other" kind, don't you worry.)

I just don't know how to handle feeling how I did in a place that won't be comfortable on the best of days?

I don't know, but when I was feeling so sick on Saturday, I really wanted to tell everyone that there was no way, no way at all, that I was going to go to Burning Man.

But, now that I'm feeling better (Sunday was a little touch and go) I'm just wondering how do I make sure I can handle it if I do end up feeling that ill while I'm there?

I mean... I can make sure I have something to throw up into (bag?) and the Gravol that you can't throw up (if you know what I'm saying, and I hope you don't) but I just don't know.  I couldn't stop thinking about it Saturday evening and night, and now I don't know how I'm going to survive if something goes wrong like that.

I don't even know what went wrong?  Did I pick up a flu?  Did I get too much sun and not enough water?  Did I eat something bad?  Were the blueberries tainted?  Did the dairy and gluten disagree with me?  I don't know.  If I knew, I feel like I'd feel better.

I've avoided the blueberries, but is it worth it to eat some more and see if I get sick again?

I'd definitely go with food poisoning because it came on so fast and violently, and that's how food poisoning usually works. If it were me, I wouldn't touch anything I had eaten in the 24 hours before hand. And stick to bland foods -- bananas, toast, applesauce, potatoes -- for a a day or two until you are sure it's done.

Bland foods are my friend, for sure!

Don't worry too much about it -- if your at place camping where people are partying, there is a good chance there will be some ejecting all around you -- party favors of all kinds often lead into that kind of ending. And don't go to the porta potties in that situation -- that's what bushes are for :)

"your at place??" really? I meant if you're at a place

Yes, bushes would help, I suppose, were there any, but there won't be any where I'm going, yikes! ;)

People are really helpful at burning man, and if you get sick someone near you probably will have an RV you can hang out in for a bit. There is also an extensive medical camp, right near center camp equipped doctors and nurses and EMT's, with trailers and running water and electricity and all that. If you are terribly sick they will even medivac you from the playa (hope this does not happen to you, as they will also charge you for that). There are a lot of resources available and a lot of people around, so you won't be stuck in your tent with no where to go. :)

oh my gosh, thank you for saying this! I just figured the medical tent would not want to see me, but I didn't think about other people being able or willing to help :)

Of course! If you are sick go see the medical people, or find a ranger. They are so helpful and they want you to be happy and healthy! Trust me, they have time for you!!!