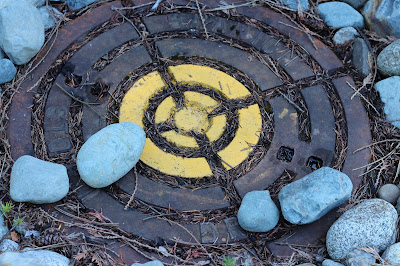 So I sort of just sat there Thursday, after calming down a little, and after calling Jay, and made myself just breathe.  The point I came to was that I wanted to approach this whole thing, seeing him, talking to him, whatever, from a place of love.

And maybe that sounds cheesy to some, but I mean I didn't want to be sitting there yelling at him or anything.  The bad feelings we had between us, or, certainly that I had, weren't what made up our relationship, and besides, what would I like to look back on in the future?

Jay came by about an hour later, so I'd had time to sit, and tidy up a little if we're being honest, and email a few friends for support, and distract myself.

I was hoping that Jay would look ugly.  That happens with exes sometimes I find.  I'll see them post breakup and wonder what on earth it was I ever saw in them.  Had I ever really found them attractive?

But Jay looked good, cute, as he walked down the hallway.  Did he want to come in?

I sat on my couch.  Waited while he took off his shoes and closed the door.

"You know I'm going to cry, right?" I said, laughing a little, because, yes, he knows I'm a crier.

He smiled, and nodded, looking a little sad himself.

I don't really remember what I said to start the conversation, but we slowly talked about... things.

I told him I was really choked by how things ended.

He asked me to elaborate.

I turned to him, eyebrows raised and asked if he really didn't remember the incident that had me so floored?

He wasn't actually sure he did, no.

I told him.  He sort of shrugged.

I told him, word for word what he said, and he said, oh.  That.  I barely remember that.

I don't know, you guys.  Maybe some people are just that clueless.  I told him that it was not ok, and that in future, he should never repeat what he did with anyone, ever.  Ever.

And we talked some more.

He told me that he'd wanted to see me.

We talked about how he just wasn't willing to be in a long distance relationship.  That he doesn't have the time or energy for that right now (I say ever) but that now that he was right here with me, he was happy.

I told him that was shiny object syndrome.  He liked Vancouver when he was there, and me when he's here and that he sort of forgot each, when they weren't right there in front of him.

I'm sure lots of you are suspicious.  I know I still have mixed feelings about the visit, but I'll tell you that in general, I believe what he said and how he feels.

The story doesn't end there, but talking about it like this has gotten me all riled up again, and sort of emotional, so I'm going to stop for now, take a few deep breaths and come back to it when I'm feeling calmer.

Shiny object syndrome. I like that. It's very true and very articulately put on your part. It's so hard to be articulate when you are emotional. I give you kudos for your strength and grace.

Something about this story raised a red flag for me.

I hope I'm wrong, really wrong, but I wonder if he used you as a pit-stop to get from Point A, to Point B.

If he strongly feels that way, then you might have a few more questions for him.

Thanks Sanibel Gal, I was pretty pleased my brain came up with that one too! :)

I hear what you're saying JS, and yes, I've talked with him about it.