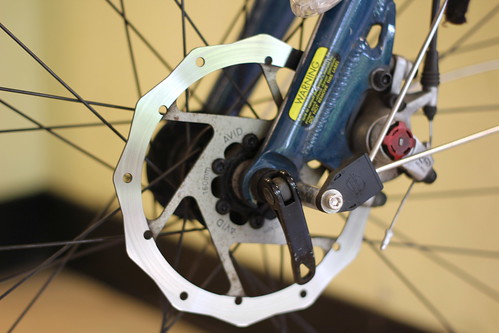 This last week or two, I've been looking very carefully at vehicles with bikes on the backs of them.

Because you NEED a bike there.  It's frigging massive.  So massive, unless you've been the scale of it is un-understandable.  (I'm pretty sure I made that word up.)  So when I see people with bikes on the back of their car, camper, RV, truck, I wonder... are THEY going to Burning Man?

I know when we head out of town we'll be on a ferry with tons of cars with bikes.  And as we travel closer and closer, we'll stop at camp sites and rest stops with even more vehicles with bikes attached.

And soon enough, those vehicles will be sporting bikes that are a little less than boring.  And the vehicles will be packed to the rafters.  And maybe, just maybe, there will be a little Burning Man symbol on the back of the car and I remember it being the most amazing feeling last year; realizing we were part of this larger group of strangers all making the trip to the same, amazing place.

Sure, a sort of a pilgrimage perhaps, but each time I saw a car with bikes, or a van with the Man symbol on the back I thought "I'm going there too!"

And so now, as I'm driving around town running my errands for leaving, I keep wondering if I'm seeing other Burners on their way down to Nevada.

Like the couple I saw at the grocery store today with a license plate from the other side of Canada.

Sure, maybe they were just travellers, or PhD students in town for the new school year.

But my guess, and the gal's half green head of hair was a nudge to me that I was right, is that they were on their way to Burning Man.

Me, and tens of thousands of other people.

It's crazy when you think about it like that.

But it's a good crazy.

So here's to very full cars with fun looking bikes on them.

They make me smile.
Posted by Victoria at Thursday, August 21, 2014