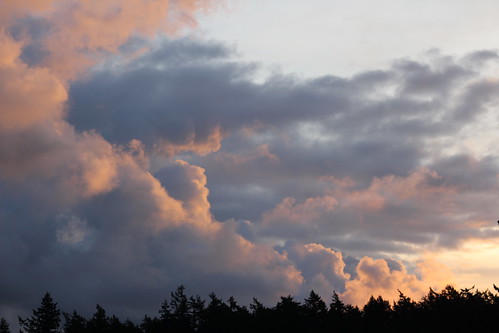 The other week Jason and I were talking about my photography and how I felt about it and he suggested I ask for critique from some professionals.  He'd mentioned it a while ago but I had a little baby freakout about the fact that if someone told me all the things that were wrong with my photos I'd probably burst into tears and run away and hide never to be seen again.

But about a month ago, I came to a point where I realized unless I had constructive guidance, I was probably just going to stay at the point I'm at now.  And although there's nothing wrong with the point I'm at now, I consciously want to be further ahead.  So... critique.

There are forums and sites and places online where you can ask for people who know about these things to look at your work and give it critique.

We talked about the fact that critique is based on actual artistic guidelines and not just "Ugh, I don't like your photo, it's dumb and you're a poopy head."  Because, well, sometimes the internet can be that way.

So even though I thought I was going to be ripped to shreds, I put up one of my photos for critique.

As I told Jason, I hadn't purposely planned out the shot, so I didn't feel like I had a whole lot I would be overly sensitive about and the people were fair and kind in their suggestions.  It was a really good experience.

I mean, it felt overwhelming too... all these new things I could/should be thinking about when taking a photo when I'm used to just seeing something, pointing and clicking... it's... overwhelming.

And I took it a little personally when I found that my photo had only received a "score" of 49%.  That... kind of hurt my feelings.  That half of the people didn't like it.

But, as Jason very kindly pointed out... that's better than getting 30% or 10% and that on a site of this level (his words, not mine) it's a great thing for a newer photographer.  So... I took a pause... and am seeing it for the positive.

And then... a few days later, even though it quite literally made me feel faint (I thought I might have to put my head between my legs) I submitted the same photo to the site's weekly contest.

I finished 447th by the way.  Which makes me smile, because I have no idea how many entries there were.  448?  1000?  500?  No idea.  But... if nothing else, I got some people saying they liked the photo, some people adding it as a favourite, and, maybe most importantly?  I put myself and my work out there in a way that was very very scary to do.

*pats self on back, with paper bag nearby in case I need to do some breathing into it to stop from fainting*
Posted by Victoria at Friday, January 16, 2015

Huge congrats for putting yourself out there! I found crits to be inconsistent and unnerving in art school. In spite of "guidelines", feedback is often personal and subjective. (Except for technical stuff. But then in Fine Art photography, the technical "rules" of commercial photography are often irrelevant.) It is great to get valuable feedback, which is always a possibility. I got frustrated when it seemed to be a total crapshoot as to how your work would be received!
In one of my studio classes there were 2 students working on nearly identical photo projects. The 4 instructors loved one of them, the other got raked over the coals, leaving the class quite perplexed!
Sometimes I just want to go back to taking "pretty pictures" by instinct and not worrying about everything else!
I've always loved your photos, V!

But aren't you putting your thoughts out there for the world to see with every blog entry?

Does that mean you place a greater emphasis on your art rather than this blog?

Thanks Y... and yes, it often can feel frustrating... and Jason "warned" me that if I started down this path, it might mean I never quite "enjoyed" taking photos the way I used to. So... yeah... *shrug* ;)

AotF, it's funny and that's an interesting question... because yes, I am putting myself out there every time I post an entry here but I don't think of it as creating something, just... the inner babbling of my brain that is sometimes more sculpted than other times. Greater emphasis? No... but I haven't entered any writing contests... maybe I don't consider myself a "writer"?????

I dread to think where my idiotic instagram snaps would place in their competition :)