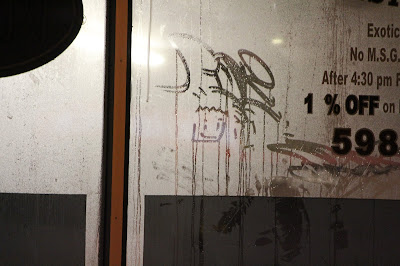 Ok, so I'm trying to recall the initial days of being sick and all and I think one of the things I did pretty quickly was connect with a counsellor.  I literally googled and read through bios and went with someone I had a good feeling about, knowing that if we didn't click, I could just try again with someone else.  (I'll talk more about them later.)

So I saw my doctor a lot in those first few days and weeks and I started seeing a counsellor weekly.  I didn't tell a lot of people that I was off sick.  C-Dawg knew, Jasson knew, my brother knew, I think that was it for a while.  In part because I thought it would just be a couple of days.  And then I thought it would be maybe a week.  Or, ok, maybe ten days... two weeks?  I had no concept of it being anything more than just a little bit of time off but it's almost as if once I stepped away and took "a few days" everything just went boom for me, emotionally and mentally speaking.

It's honestly a bit of a blur at this point.  I have my day planner diary I could fish out of storage and look through but there were appointments almost every day initially.  Doctor here, counsellor type there, acupuncture or whatever else I was doing before, financial type appointments and the list goes on.  I did not just go home and lay on my couch and zone out.  Not all the time anyway.... I had appointment after appointment after meeting after meeting and I was dealing with feeling so unwell, and a breakup and frigging regular life and friendships and family and looking back I have no idea how I did it.

I even just went back and glanced at some posts from December 2015 and y'all?  I sound quite chipper!  Wow.

My doctor, as I think I've half mentioned before here or there, diagnosed me with a fairly long list of diagnoses.  PTSD, Panic Disorder, Social Anxiety, Major Depression, Generalized Anxiety.... I think that's most of them as best I remember.  (I'm sure it's written down somewhere but damn I do not want to start going through records.)

It may sound callous, but the PTSD wasn't anything new, I'd had to deal with some of that after the car accident in... what, 2009?  And I just kind of shrugged off the depression diagnosis since I'd dealt with that in my life before and this felt nothing like that.  But panic and anxiety disorders?  These were new to me.  And frightening.  But in the rare moments of relative calm I figured she was probably right.  This was beyond anything I'd experienced before.  It was more than feeling claustrophobic in a crowded elevator.  It was WAY WAY more than feeling nervous on a blind date.  This was unbearable.  And new to me.  And, as I mentioned, it had started affecting me physically.

I think I knew I was dealing with capital A anxiety because I talked to a few friends who'd confided in me that they had been struggling with anxiety and I told them I thought maybe I was too.  They were the ones who recommended some natural based products that my acupuncturist then agreed might help.  They also, and this is still kind of awkward to talk about, recommended CBD, the non-hallucinogenic portion of marijuana as something that had worked for them, but it wasn't something I was willing to try at the time, nor was it something I knew anything about.  (I did, however, early on ask my doctor if she felt there was any medical marijuana that might help and she practically yelled at me ABSOLUTELY NOT (even though medical marijuana had been legalized for a while by then and I wasn't looking for the "get high" stuff) so.... I didn't ever pursue that with her, even though it wasn't me wanting to smoke a doobie... man, it was me wondering about the "other" stuff...)

So I had my doctor who was very concerned about me and was having me come in regularly (was it almost weekly at first?) and I started seeing a counsellor right away, and I told a very small number of people and I did not talk about it AT FRIGGGING ALL on the blog that I'd been writing on for more than a decade.  And that really didn't help.
Posted by Victoria at Thursday, August 08, 2019

The irony of someone with Anxiety and Panic disorders being told they have them, is of course that it immediately triggers the Panic and Anxiety disorders.

I'm glad to read that you at least dove into getting help, and took it seriously.

I've also heard that CBD helps with anxiety, but my own experience was that it didn't. Just made me irritable, mostly.

And you're now the second person who's mentioned that reaction to CBD which I find fascinating!