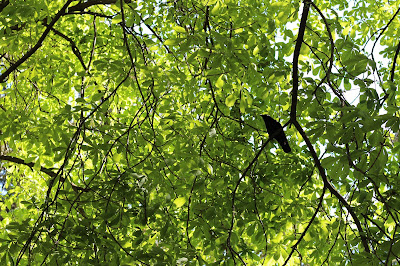 Speaking of books... I never actually read Margaret Atwood "back in the day" (you know, schooling type days when it might have been assigned or something.)  So when her book "The Handmaid's Tale" was translated (not the right word, we'll let it go) into a tv show, I only had a vague idea of what it was about, not the actual story or plot.

I didn't watch it when it first came out in 2017.  Maybe I didn't have access to watching it at the time, or maybe it didn't appeal to me, but I know it got people talking and lots of people had a lot to say about it.

It wasn't until quite recently that I actually chose to watch the first (and later, the subsequent) season(s).  And man oh man did I have a hard time watching it.

The first time I watched the first season I would almost always get a mild (if one can say "mild") panic attack, and so I would have to be mindful about when I was watching and how I was feeling.  When I think about why it was causing me such anxiety I realized it was that the main character can't trust anyone.  I'm trying not to give away plot points or spoil anything for anyone who hasn't read or watched it yet, but yeah, it was the feeling my anxiety often gives me at its worst that no one is being honest with me and no one is here for me and no one cares for me, or whatever else it lies to me or tells me when I'm at my worst and that show somehow poked that button.  Often, quite a lot.

Since I've gotten better (not well, but better), I'm able to watch the show like I would any other show.  But man, that first watch through of that first season was really hard.  It was like watching a horror show when home alone in the dark and hearing a noise outside the window... that kind of fear inducing sort of feeling.  I did not like it.

But, obviously, the acting and the production of it all (I think it's beautifully set and filmed) kept me watching and now I've watched all the available seasons through more than once.

I did get the book out of the library but it was a tricky read to transition to (some authors take a bit of time to get used to their flow...) and I wasn't in a happy space at the time, so I knew it wasn't going to be a relaxing bedtime read and I knew I wouldn't be able to renew it (it has a bunch of holds on it) so I let it go and haven't actually read it yet.

It might be a book I pick up used (still trying to save that money!  and I buy books like some people buy shoes!  or plants!  or art supplies!  wait... that one's me... shhh) so that I can read it at the pace I need to, and I'll probably make sure I'm in a better than I was headspace before I start it.

I've read, but not watched.

I won't say it was a book I enjoyed, but it was good. The world it builds makes me angry and tense, so the reading was not an escape. But your comment about getting used to the author's flow resonates, as I find Atwood's style sometimes difficult to manage.

I suspect the anger/tension is one of the reasons I haven't jumped into the show. I have a low-level anxiety that I'll just get so mad watching it, and I don't really want to do that right now.

You've totally hit the nail on the head there, it's not an escape read at all. And yeah, Atwood's style... is her style! ;)

I did enjoy the show, but not when I wasn't able to be a bit more removed.