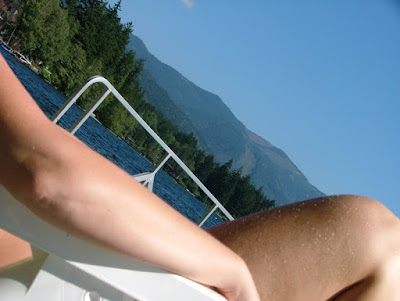 Jason has a friend who is a really good looking fellow.

So... anyway.  Jason was at an event the other weekend and ran into this guy and Jason texted me "Hey, so and so says to say hi!"

Like, no, really.  Like a little teenaged school girl who just had her crush smile at her in the hallway.  I.  Giggled.

Jason called me the next day and said that this guy had asked how I was and when Jason mentioned "we just need to find her a good guy" apparently hot guy was surprised I am single and asked Jason if he'd ever "have a chance" and Jason was like "dude, you're a super hot guy, duh!"  To, which, apparently good looking guy blushed, which, AWWWWWWWW!  *Giggle*

So then I had this bizarre to me conversation with Jason where I was like, but.. me?  He... what?  Me?  But he's super hot!  To which Jason replied, um, Victoria?  All my guy friends think YOU are hot.  And I was like, what?  Are they all drunk?

Later that same week a friend send me a photo from a party from a loooooong time ago.  Like, probably just after actual teenage high school girl years!  She asked me if I recognized any of the guys in the picture and I was like NOPE.  But damn... I was pretty.  I had no idea.  And it was this really really weird moment of knowing that was me in the photo, and not having had any idea that I was attractive at that time.

And then my brain did one of those things they make fun of in movies where it went... hey... if you can objectively see that you USED to be attractive... that means you very likely still are now?  And that that guy you think is good looking probably might maybe have kind of a point?

I mean... I know that it's all relative and what's attractive here isn't there and that you get to know someone and their heart and soul make them gorgeous but all that aside.... similar to the silly skit I referenced in the title of this post... Am I un-ugly?

(No, I mean, really.  I went through most of my "formative years" thinking I was unattractive.  Plain at best.  Now that I look at old photos I wonder how different my life might have been had I had any sense of how wrong those inner thoughts were.)
Posted by Victoria at Tuesday, February 25, 2020

I wonder as well, because honestly it sounds like you're very un-ugly and have been for a very long time. I mean, assuming you don't have skulls on your uniforms.

I have discovered though that many women I know, who are beautiful (and I'm not the only one who thinks so) are convinced they're unattractive. I blame the cosmetics industry and photoshop.

There are absolutely some industries that in trying to make themselves money are not doing much for how people feel about themselves... you're right for sure on that.