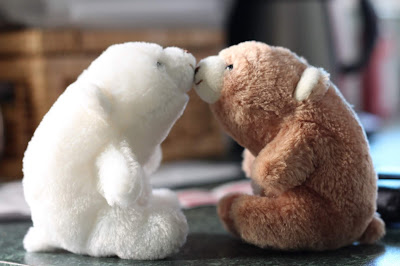 I had a hard thing happen this weekend.

It was my Dad's birthday, and I got to see him but not hug him or be near him.

When it was my Mom's birthday in April I waved from outside while they waved back from their place several stories up.  Then I went home and we FaceTimed and I cried a lot that day, but it was mostly out of fear that the gift I'd dropped off, carefully wrapped and put in a bag the week before, and dropped off using gloves and as safe as I could make it, it was a fear that I'd accidentally pass on the virus to them and they'd die and it would be my fault.

I think I've since calmed down a small amount, knowing that they pick up groceries so that's a similar risk as me dropping off a gift, and they have gone in a pharmacy or a plant store so they've been potentially slightly exposed and are so far ok (knock on all the wood).  So this time it was less about me potentially infecting them and more sadness around not being able to hug them.

I cried on the drive over.  I don't know if or when I'll be able to share a space with my parents again.  I don't know when I'll be able to hug them, or be hugged by them.  As always in life, I never know if they might die before I see them again, and birthdays, especially with older parents drive this point home... we all could die at any moment, sure, but as you age, that truth becomes, I suppose statistically more valid, if nothing else.

So it was hard to think about not being able to see my Dad on his birthday.  I called and asked what he wanted to do and he said this time he'd come down to the front door.  (I suspect my Mom was napping - I think she's the more cautious of the two, feeling responsible for keeping him as safe as possible knowing they're both at higher risk.)  So my Dad came down and came out the door and walked towards me and I had to take a step back.  I made a joke of it... pulled up my bandana mask and he stopped, but damn if I didn't feel like he was coming in for a hug and I just wanted to let him.  And that was hard.

And he was blue.  Sad.  Low.  Which he isn't often like that, but he was and that was even harder.  Because I don't have a lot of positives to say about this pandemic situation and I think he's finding the nothingness of the days a little endless.  Plus not being able to see family or friends in person.  That drains you.  And this is now the third or fourth celebration we've had to do at a distance.  Perhaps the first one was... different, unique, a little interesting?  And now it's more of a reminder that we don't know when things will be more normal again.

It was really hard to see my Dad sad.  And when I FaceTimed him later he said that it was "bittersweet" to see me.

He even talked about how they're pretty sure Christmas "won't be like anything we've known before" and ain't that the truth?

I wish I could take everyone's pain away.  But I especially wish I could absorb that of my loved ones and my parents.  This is hard on all of us, in different ways, and it's hard to see someone you love hurting.

So that was hard.

And I'm so glad that the last time I saw my parents in person it was a nice visit and we hugged and said I love yous.  I said that to my Dad this time too, in person, from a bit of a distance, but still... seeing people distantly but in person is different than a phone call or a text or a FaceTime.  It just is.
Posted by Victoria at Wednesday, May 27, 2020