Gimme A Head With Hair! 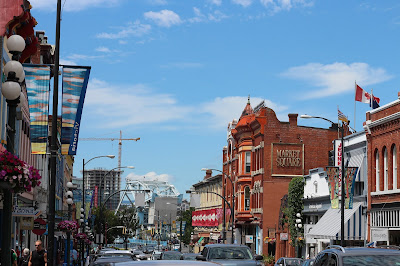 I know that that's technically and scientifically not possible but that's absolutely how it feels.

I had a cut in... (I forget...) Summer/late Spring?  It was during Covid anyway and I was nervous about it, but it was long then.  We gave it a good chop at the time and I didn't book another appointment... we both forgot I guess.  I made an appointment a chunk of months later and it was for the end of December.  As that date approached I got more and more uncomfortable (we were all worried there would be an uncontrolled spike from Christmas and people choosing to gather) and I cancelled that appointment.  My hair was already fairly long at that point but nothing major.

What happened when I finally made my Spring/Summer appointment last year was that my hair had gotten so heavy it wouldn't stay in a bun or ponytail it was just too heavy.  And that's happening again now, so I called, but she took February off so the first appointment she could fit me in is for the end of March.

And now my hair feels and looks really long.  Like, reallllly long, for me anyway.  It's down to the middle of my back at least and it really does feel like there was some overnight shift or something where it went from long to dude..... long.

It's awkward because as it gets warmer, I put my hair up for temperature control and when I'm at home I don't care if the "bun" is sideways and crooked and half falling out, it's just up and out of the way.  But now that I'm kind of out in public for the work-related stuff I need to look presentable and, well, the hair's too long and heavy for that right now, d'oh!

Oh, and one of the other small frustrations with it is that it tangles at the drop of a hat.  Weirdly (to me at least) really only the right hand side, but yeah, it knots pretty nastily and sometimes I have no idea why.  Like, I know if I wear a scarf or something around my neck area it will tangle (thanks right hand under hair!) But sometimes it'll tangle/knot from ... I don't even know... walking?  So it's not so much that I dislike it, but it has a bunch of things it does now that make my life a little more complex than it needs to be.

I dunno, it's just weird.

I have quite long hair right now.  Not long enough to be of note, but quite long for me (I usually keep it around my shoulders).  Going to be a good few inches chopped off in a month or so from now!