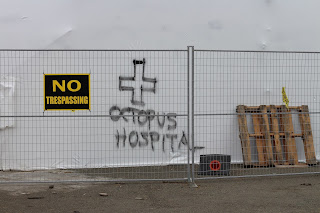 So, I had a funny the other day.

Funny to me at least!

I went out to my car and there was a banana peel under it!  WHAT?

I was kind of annoyed, but as I drove away thinking about it I realized I could probably make a silly post for you all referring to the "banana peels at the base of trees" posts I've made over the years.  So I kind of smiled to myself about that post idea and let it go.

As I was driving home that night, which, I should point out, I need to wear my glasses once it gets dark, so I had my glasses on.  And as I was driving home that night I started to think through the post.  "They found me you guys!"  I would write... and then tell you about how the banana peel person had clearly seen my posts and found where I lived and was leaving me a message.... of some sort!  I was a marked woman!  Dun dun duuuuuuuuuuun! (Mystery show sound track.)

As I pulled into my spot, I got a little annoyed because it's kind of rude to chuck a banana peel into a parking spot, even if it's empty at the time, and you know what there's a garbage bin right there, and a compost bin too so... yeah, I got a little grumpy about it, but that was ok, I'd cheer myself up by writing a silly post.

I parked, and got out, telling myself that maybe the next day I'd come out with a paper towel and throw the peel away because I didn't want to smush it and it shouldn't just sit there, and so I checked to see if it was still where I'd seen it last and, um, you guys?  Remember how I said I had my glasses on because it was dark out?  Well.... yeah....

Turns out no one threw a banana peel into my parking spot.  Ahem.

Turns out it was just a leaf.... cleverly disguised as a banana peel for anyone not wearing their glasses and just kind of quickly glancing and assuming!  Ha!