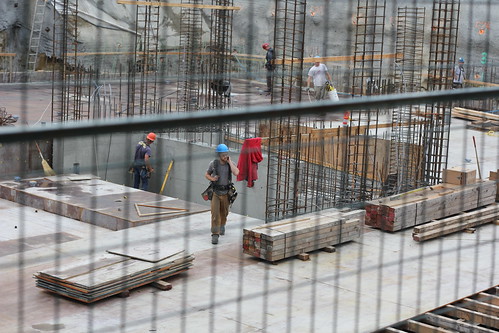 So Jason had a, no wait, I have to back up a second.

Last weekend, Jason and I went to the (not so much with the clothes) beach and there was a particularly attractive man there (I honestly only noticed his bottom and lovely tan as staring at someone's weiner is still pretty weird.  Oh, and his face.  I noticed his face.  And his bottom. Sorry, I distracted myself.)  Jason took one look at him and declared the guy a model.

I may have snorted internally, but Jason, with his photographer's eye was right and he went and chatted with the guy/model.  They got along well, talking about pro photography/modelling stuff and said they'd love to work together at some time in the future.  Jason gave him a card and I figured we'd never see the guy again.  No biggie, he was still something nice to look at for that time period.

So... Jason had a photo shoot booked in one of the local hotels.  (Apparently that's a thing.  For some reason it made me think of porn, but... that's probably just me.)  It was going to be a tasteful boudoir (bedroom/bathroom) type of shoot for a model Jason knew who was in town for another shoot.  Jason had told me that I was welcome to come and watch the shoot to see what I could learn about lighting but that I had to sort of stick in the background and I wouldn't be shooting, except for a few behind the scenes types of shots, maybe some of him working, but shooting this pro model was going to be a no-no for me, so I didn't think much about it.

I threw my camera in my bag and headed over to his hotel after work.

Unfortunately, the model had already left for a flight, so I didn't get to see any of that shoot happening and I was a little disappointed.  Jason said that since the hotel had been booked for the night, he'd made a few phone calls and his assistant ("Junior shooter?") was coming and... so was the male model from the beach!

(I think my brain exploded at this point)

I looked at my camera.  Low battery.

I took a few shots, watching the battery drain completely and started to pout.  I had been told I wasn't shooting!  Now there was a chance I could?  What was I supposed to do?

I figured that it was worth the drive home and back to get my battery charger so that even if I'd miss and hour or so, I'd be able to shoot the rest of the night.

So I (kind of) sped home, grabbed my charger and got back to the hotel in record time.

And then had to wait for the thing to charge!

But it was awesome.  The guy (who I hadn't actually talked to at the beach) brought his adorable girlfriend and he was really nice.  I would have just assumed that a guy that attractive (because you guys, really, so handsome) would be a jerk but not at all.  Funny, sweet, maybe even a little shy, quiet, awesome.

Jason talked his assistant through lighting set up (and I tried to listen and learn but... THE MODEL WAS IN THE BED IN HIS UNDERWEAR!) and then some pointers on posing male models (TO MAKE HIS SIX PACK LOOK EVEN BETTER!) and then I just kind of said aww fuckit, the battery's got to be charged enough!

There was no way I was going to manage on manual, but I took a few shots just to see.  I figured it wasn't worth the stress and I just wanted to enjoy shooting this guy because how many times in my life am I ever going to have this opportunity?!? so I just stuck it on auto and I started shooting.

The first few shots were blah but I've learned that when shooting people in a situation like this that's just kind of like the warmup.  I honestly spent a lot of time just staring at him.  Sure, for the first five minutes it's because he was so good looking, but after that it was more to figure out where I wanted to be to get the shoot of him that would make him look good.

And there were some terrible shots for sure.  I've deleted them since, but god bless digital cameras and not losing a roll of film to blinks and weird eye movements and bad timing, but I have to say you guys, even a gorgeous guy can have a terrible photo taken of him.  Take heart.  I had proof!  I managed to get some of him looking as if he were not so smart, or half asleep, or on some drugs, and I even giggled at one that could have made the cover of one of those trash magazines it was that unflattering!

But after a while, once the other two were done shooting him, I'd slip in and get a few shots.  And after a while of that, he'd make eye contact with my camera and boom.  Got it.  Awesome.  Those of you who shoot more than casually probably know that feeling of when you click the shutter button and you KNOW you got the shot you want.  I think I actually said "there we go" outloud, I just knew I'd connected the way I'd wanted to.

And it was fun.  He was sweet and humble and a nice kind of flirty and when I wasn't shooting I was giggling away with his girlfriend and taking pictures of her too (the two of them would make the most beautiful babies...evar!) and I really really enjoyed it.

And I have to say this.  It was not AT ALL sexual.  Not arousing (other than the first few minutes when I was a giggling twelve year old going "OMG THERE IS A GORGEOUS MAN IN HIS UNDERWEAR IN A BED RIGHT IN FRONT OF ME!!!!") or anything other than photographically interesting.

I wanted to take some good shots.  That's what my focus was.

I wanted to make this attractive person look good in a photo.  That's what I was thinking about.

I was thinking about angles and where I wanted to sit/stand/etc.  It was so cool you guys.  SO cool.

I chatted with the guy after and he talked about how it had been fun and how it takes four or five times of shooting with someone before you get the good shots, before you get comfortable and my heart went a pitter patter thinking that if he shoots with Jason again maybe, just maybe I could shoot him again too?  *gulp*

I looked through the shots I'd taken later that night and you guys?  I'm in love.

Not with him.  I don't even want to make whoopie with him, I'm just in love with the shots I got.  The "wow, it looks like he wants to make whoopie with me through the lens" kind of shots.  The shots that made me fan myself because, whew.  What a pretty, pretty person.

I'm not even going to talk about the self-doubt thoughts I'm having about how the shots could be better, I'm just going to enjoy the shots I took and the fact that they make me giggle and feel very happy (in a few ways, ahem.)

I won't be doing anything with the shots, I'm sorry I can't share them here, but it was an amazing experience to have had and I'm feeling very lucky and happy to have had it!

Such an awesome experience, and I'm glad you got to have it.

I try to explain this experience to my friends, usually before they decide they might model for me. That when you're shooting, there's a kind of disconnect from the sexuality. You see them as beautiful, sure, but you are mostly seeing them as the photo subject. You're not thinking "nice boobs", but "I don't know if I like the shadow coming down that way, and I think that leg needs to move forward a few inches to make the hip pop, and that pillow is in the wrong place, and ..."

And then there's the conversation after, where you have to explain that you took 200 pics, but if 20 of them are good it was a good shoot. And that out of 200 shots, 2 would probably be frameable. And that doesn't mean they're not beautiful, sexy and desirable. It just means that timing, posing, lighting, and everything else conspire to make it tough to get perfect shots every time.

I figured this out years ago, watching a documentary about the Sport Illustrated Swimsuit issue. They're doing all the shoots and stuff, and flashing some of the results up and I'm thinking "Wow, I'll never shoot that well." And then we cut to them trying to pic the cover photo ... from out of 400 shots. And most of those 400 shots suuuuuuuuuucked.

And that's when it clicked. We only see the absolute best shot on the covers. The best pics on the inside. We don't see the hundreds of shots where the model blinked, looked away, was posed so that perspective made her look short. Even the pros take bad pics of beautiful people.

I'm so glad too! A great experience :) And you're so right. It's not a sexual connection, it's more clinical than that and yes, you may get a ton of shots, but only have a couple to use.

And yeah, what a cool thing to realize about the cover shoot, eh? Awesome :)

"Even the pros take bad photos of beautiful people." Amen!

Many years ago I took photos of the girl I used to work with - the competition swimmer. She wanted them to look back on when she was older. I had exactly the same experience as you - was so wrapped up in light, and shadow, and form, that it wasn't sexual at all. Weird.