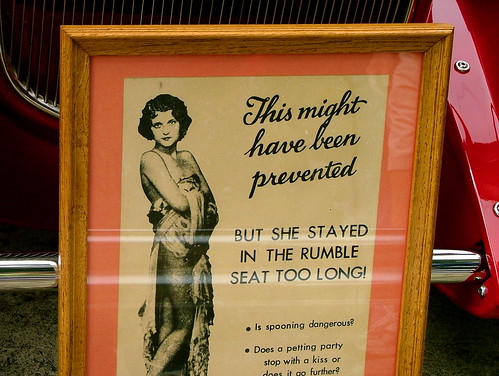 So, Vince isn't talking to me.

I feel like I'm gossiping talking about it, but it popped into my head last night for some reason so I figured my brain wanted the chance to talk.

I haven't seen him in ages, not being comfortable with him hanging out at my place and his wife not being aware of it, no matter if Vince himself has no problem with it.  But I am at fault for not being clear about this with Vince.  Instead I've just being saying no when he invites himself over and this is my fault..... my wimpiness and lack of strength in being direct.

He texted a few times after I was back from Burning Man and really upset and stressed with everything and while I maintain that texting is not a good method of communicating, when he asked if I was happy to have him bugging me again I answered honestly "no, not really, sorry."

I'd meant it to be light hearted.  But honest.  But he took it, it seems, as unkind.

He wrote me a scathing text back about how anyone else who treated him as horribly as I did would not be spoken to again so it was best he just left well enough alone with me goodbye.

And I just let it go.

The lesson I'd like to teach myself here is to be honest about how I'm feeling, even if I feel uncomfortable saying it.  I feel like I should have told Vince I didn't feel comfortable with a friendship, didn't feel comfortable with him wanting to come over and hang out.  And maybe I should have even told him I found his texts at times to be frustrating and annoying, I don't know.  I just figure it might have been better to be clear.

I know he's been angry with me before and stopped talking to me for a while so perhaps I'll hear from him again when things settle down.

At which point, I still don't know what I'll do or say, seeing as texts, again, are not a great form of communication, but I don't feel comfortable having him over to tell him I don't want to have him over anymore.

It's too bad Jason doesn't live with me.  Then I could have Vince over and introduce him and...well, I feel like that might stop his late night requests for visits.

Anyway.  Even just writing this has left me feeling icky and kind of gross like I'm talking about Vince behind his back or something, so I'm stopping now.  Maybe lets just pretend this never happened.

And please, learn from the error of my ways and be honest, don't try to save people's feelings too much.

Or perhaps not at all... what do I know?

Even though it will have no appreciable impact on whether or not he decides to keep texting your or asking to come over late, you should continue to be clear about how you feel. There's a certain amount of trying to spare someone's feelings that makes sense, but there's also a point when it becomes fairly clear that the other person doesn't actually care about your feelings at all. It seems to me (and admittedly, it's just from the stuff you've written) that Vince is in that latter category now.

At that point, being honest is much more important than letting him feel good about harassing you with unwanted attentions. Yes, he's going to be mad or upset, but what he's doing is upsetting and making you feel guilt and ick and uncomfortable.

What you texted (no, not really, sorry) is not unkind. Unkind would have been "F*** off and die, ass****" or some variant. If anything, you were too kind. However, your response did not fit his narrative (which is that you eagerly wait for him to contact you), so he's upset. Well tough cookies for him.

Anyway, yes, he'll text you again because guys like him always do. And when he does, I hope you'll continue to be honest and tell him that you'd prefer he stop. Because he should. And should have stopped a while ago.

You know a lot. You're wiser in these matters than you seem to let yourself believe. Stay strong, be honest, and you know what - maybe make your own feelings a little more important than how Vince feels.

Grrr. Well, that's my rant for the day dealt with. Vince probably just spared one of my coworkers a long talk about the evils of Windows 10.

Unrelated to the rant, that pic has raised an important question ... Is spooning dangerous?

I don't think you did anything wrong here. You responded with a direct response...it was not rude, mean, or any other negative adjective. Just your truth.

He was clearly fishing for a different answer and is now pouting. You can't control his reaction to your response...you can only control your response. Don't let his immature behaviour wear you down. He's not worth it.

If you're not comfortable being a friend under the conditions he is trying to force on you, that is your decision. You need to be sure your well-being comes first, not his. Period.

You need to do what's right for you and what makes you the happiest and most comfortable. He has a wife and other friends to support him. Don't get pulled into his muck and immaturity.

I feel like I have a hard time with that Elliott... making sure my well being comes first. Reminds me of a little poster I have up somewhere in my house... "I'm a recovering people pleaser. Is that ok?" ;)