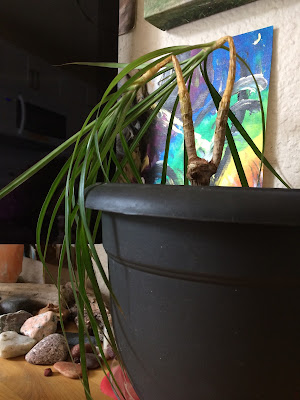 Yeah.  Yet another one of my babies who I really don't think I can save at this point.  Ugh.

I may be making light of it at times, but I'm really bummed.  This one, I know I even transplanted it (I can tell because of the container, it's one I bought at some point, not the original) and that would have been over a year (maybe two) ago.

It really bums me out that just a few months of change (neglect???? I don't know) did this much damage.  So yeah, pretty sure this one isn't saveable.  (And in case you're not a plant person at all, those stems/stalks/whatevers are supposed to be upright... and always have been up until the last week or so... sigh)

(And yeah, I can't stop picking up rocks... those ones there are my more orangey ones I've found lately... that for whatever reason I didn't put in with my other giant pile of rocks... ahem, I mean "collection"...)
Posted by Victoria at Friday, March 02, 2018

It is a bit disheartening to watch something you're responsible for fail, but house plants are finicky types. I think we blame climate change for this, though, and leave you off the hook. With this winter weather, it must have taken out your plants.

Oh and thanks? lol I can't see past the half dead plant! (am hoping it will somehow make it... please!)