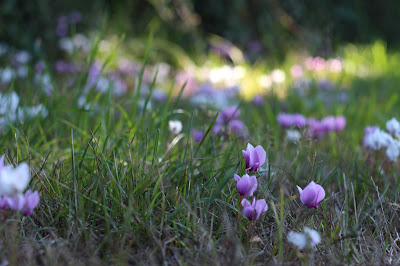 The plus side of the horrible car sickness the other day was that at a certain point on the drive, while I was focussing on surviving Jason said "THERE'S A BEAR!"  And sure enough, there was a black bear just strolling across the road ahead.

I wanted to drive right up and, I dunno, see it?  Resist the urge to hug it?

I was surprised at how slowly (casually?) it was sauntering across the road, just like... do do do.... Jason said they only move fast when they have to or want to but I don't know why that struck me as so interesting.  Like I just kept saying "he just... strolled along like that!"

We also saw an eagle sitting sunning itself and I also heard a bird making a weird noise that I couldn't identify and when I went looking for it it was a chipmunk! so... nature is awesome (but that drive wasn't)

It's only the second time I've ever seen a bear in my life, which Jason thinks is surprising.  Both times it was similar... the bear up ahead crossing the road.  And, I suppose, in vaguely familiar parts of the Island.  It was cool though, although I would have loved to get closer, while knowing that that's not really realistic.

I've seen the photos from the guy who goes and sits at a certain river in salmon season to photograph the grizzlies and they just ignore him, and, well I don't think that's something I'm ready for, but I would have liked to have seen this black bear up close (or at least have had my glasses on, d'oh!)

Bears on roads do have a "What, you want me to move?" attitude that's pretty amusing. Was driving through Jasper park, and there was a bear ambling along the highway that had about a dozen cars lined up behind him. He eventually, begrudgingly moved to the side of the road to let us pass, but you could tell when you drove by that he wasn't happy about it.

When I was a kid, driving through Manning Park you'd stop, roll down your window, and feed the bears. CRAZY.

Or possibly "what...this is my land you weird animal"