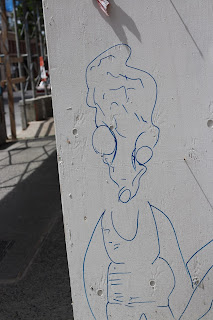 I know this isn't news or new information but I feel like over and over this past week or so I keep thinking/realizing "I am so so hard on myself."

And each time I've been hit with or reminded of that thought it kind of knocks me over... it's not a good thing.  Not anymore.  Like, maybe it was, but it's not anymore.  (And I suspect it never really was but got me through so I kept doing it.)

I'm trying to come up with a way to explain what I mean here...

(Probably going to fail at that WOO HOO.... you see how this works?)

So let's say my garbage is getting full.  And I know this because I notice the level of my garbage every time I put something in it.

And let's say that last night when I put something in the garbage my brain went "should probably take that out soon".

Then there's usually an immediate almost whining (think surly teenager) thought of like "but I don't want to" as in, "well it's late now, and I don't want to go outside, it's dark and cold and I already have my pjs on and I can just do it in the morning" and often that includes some sort of sense of "I suck".  Like "oh, I'm too lazy to go do it now, UGH" and, well "do it in the morning I guess... loser".

Which as we know, if I was saying that to a roommate or a child, we'd all be horrified, but saying it silently to yourself?  Shrug.

So then the next morning at some point there will be this sort of heavy feeling.  A sense of doom?  THE GARBAGE IS FULL AND YOU NEED TO TAKE IT OUT.  And that heavy draining sensation just sits there.  And honestly, when it's something far more important than taking the garbage out or even if it's not that important, the feeling is even more urgent.

And then I sort of, without actual internal speech (so it's more like a sense or feeling than an actual conversation with words in my head) I start to be mad at myself.  Or to be angry about the weight of having to take out the garbage.  Or the fact that I haven't done it yet or didn't do it last night and there's this constant sense of "I suck" or some version of that that is negative and unkind.

And so let's say I take the garbage out.  It's done.  New bag in and all the rest.  Well it's not as if that internal self-hate stops.  It's like it has to get the last word (feeling) in.  Like how this is all just going to play out again next time the garbage is full and how I shouldn't even have garbage because I'm ruining the world and I should be recycling that plastic even though there's a pandemic and I'm stupid to be afraid of going into places to recycle plastic so the entire environment is falling apart because I'm TOO SCARED of a virus and god I suck.

And so with this one weird example I can sit and see just how harsh I am with myself and how horrible the thoughts and feelings and internal non-dialogue is.

And I keep waking up and feeling this pressure of SHOULD.

Like, well today I SHOULD write blog posts.  And make art.  And read that book.  Oh and look into renewing the library book too because you're not reading it fast enough.  You suck at art by the way and everything is lame.  Shouldn't have bought that book, you're avoiding reading it.  Oh, don't forget to text everyone to make sure they're ok and they know you care.  Not that they text you because they have real friends, you know, not you.  And try on those pants to see if you're keeping them and eat better.  You're eating crap.  Never going to be fit.  Going for a walk today?  You don't even want to do you, you're just that lazy.  You should.  You should have gone first thing.  Except you slept in because you're lazy and only going to ruin the rest of your life.

As I was thinking about it this last while I wondered when (as an adult) was the last time I allowed myself to just... not.  Like for an extended period of time.

And I don't think I have or do.  Because it feels like there's this worry or concern that if I don't stay on top of things things will get unmanageable (?)

Like if I imagine letting myself do nothing, no "should"s.... I will turn into this lazy hideous person who hasn't bathed in a month and has trash all over their house and no bills paid and so that's a pretty intense feeling but it's there, obviously...

I mean not that I'm perfect.  Nope.  My place isn't spotless.  My floors aren't washed or dusted.  Bathroom could use a cleaning.  Kitchen table couldn't be eaten on right now so it's not as if that fear of not keeping up means I have a perfect record.

This isn't something I have a clear answer on how to "fix", by the way, and yes it's come up in counselling.  But I am really aware right now of how hard on myself I am and that it's not getting me anywhere and not improving my life in any way I can tell.

Just a thought.  A realization.  An awareness.

Something I'd like to change and eliminate, but I'm not sure how, and I doubt it'll be overnight.

I've contextualized those thoughts as a mine cart heading down into the darkness, and I try to mentally tip cart over hopefully before it gets too deep. It doesn't always work for me, but it has helped me break some pretty obnoxious moments of self-hatred and self-pity.

Which is mostly me thinking you'll find some way yourself to cope with some of this. Being aware of it and possibly recognizing the irrationality of the thoughts can help.

Being aware is I think a solid first step (that isn't as easy as it sounds!)

It really isn't, because those thoughts are actively working against you becoming aware of it, I think. In my case, it took that outside person to point it out to me (in counseling).

One of many reasons I think counselling could help so many people, that outside perspective can make such a difference!