Goldilocks And The Two (So Far) Hats

Jay found it pretty chilly coming back here after being in much much warmer climes over Winter, so I decided I'd try to improve my (newly acquired!) knitting skills and see if I couldn't make him a hat.

I found a simple enough pattern (which I keep wanting to call a "recipe") and got the right kind of wool (yarn) and the right size of needles and I knitted away.

I had to concentrate (tongue sticking out of the side of my mouth kind of concentration) because it wasn't the simple, straightforward kind of knitting I'd done before.

I was supposed to knit until the... hat...like knitting (pattern?) was 25.5 cm long, but after a while I started to feel like this hat was becoming incredibly... big.

I took it over to my Mom's and she had the genius idea to measure it against a toque she had (why I didn't think of this is beyond me, I just kept trying to awkwardly wrap the knitting, needles and all, around my head) and, sure enough, it was ready to be finished.

I finished the thing and it didn't look too terrible and I was pretty proud of myself!

And then I tried it on to see how it looked.

Ok, well maybe not giant, but I have a huge head and hats rarely fit me and it was big on me.  So... a very large hat.

But it hadn't taken me a very long time so I figured I'd make another, smaller one.

So because the (not recipe) pattern hadn't really worked, I kind of tried to mathematically adjust and I knitted the new hat even faster (well, duh, it was smaller!)

And then I tried that hat on, and, well, wouldn't you know it, it was just a tiny bit tight.

I lay the second hat on top of the first one and it wasn't quite half the size, but I realized that I'd managed to make Goldilocks hats!

This hat was TOOOOOO BIG.  And that had was toooooo small!

I can only hope that the next hat is JUUUUUUUST right!

And they all had warm heads happily ever after.

Updated for you crazies who requested it!  : 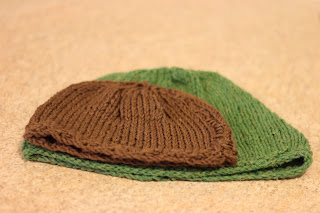 We want to see a picture of the hats!!

(I shall see what I can do)

Hahaha, the picture is priceless! I still commend you on your efforts, though... I can't even knit a scarf!