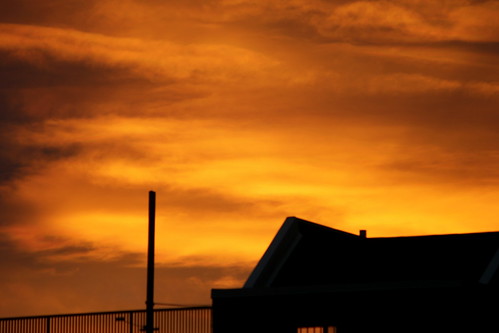 Jason and I went for a drive last weekend.  Or... last last weekend I guess, technically.  We drove for an hour or two and took some photos and then somewhere else, rinse and repeat all day.

It had stressful moments, really only when we were driving, for reasons I have no need nor desire to repeat here, but all in all it was a great day and damn if this part of the world isn't spectacularly beautiful.

There was a stunning sunset on the way home.  No, this photo isn't it, but I saw this photo in my flickr and it reminded me of the sunset in question.  We both took photos of the sunset, it was sadly gorgeous because it was a view we were never supposed to have seen, it only being there because the area we were at had been recently clear cut, but the interesting thing is none of our photos captured what was there.

I had hoped mine had, but when I got home I saw that the colours were nothing like what I'd seen.  I figured Jason's shots would be closer, he knowing more about how to get things in the camera than I do, but when he sent me a shot he'd done it wasn't right either.

I said to him that maybe it was one of those sunsets we were only supposed to get to keep in our minds.

The subtle oranges touching against the pinks while the ocean was still lit up a gentle blue underneath and the mountains were a darker blue against it all.

You had to be there.  I'm glad we were there.

It also was a reminder to me that sometimes there is beauty right there, but you just can't see it because of your perspective.  And that sometimes things that are ugly, actually allow you to see very very beautiful things you wouldn't have otherwise.

I wish every weekend had sunsets like that.
Posted by Victoria at Wednesday, October 01, 2014

That last paragraph??? Beautifully written. Especially the first sentence. You were looking in a mirror when you wrote, weren't you? No? You should...

Getting off the soapbox now.

Glad you saw some beautiful sights.

*slinks off to pay attention to what I said and how I could apply it to... other...things*