Matter Out Of Place 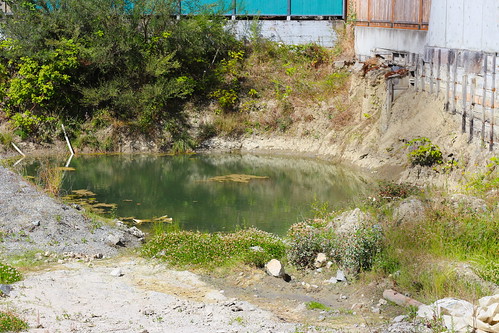 One of the ten principles of Burning Man is "leave no trace."

This isn't a new concept or idea but it's a good one, and I don't mind picking things up off the playa surface as I'm walking along, making sure there is no MOOP.

Jason and I go for photo walk/hikes when we can, and it always frustrates me and hurts my heart a little when I see trash in these beautiful, sometimes remote places.

Yes, I know sometimes it's accidental.  But chucking your cigarette butt or your beer can?  Not an accident, and really horrible and lazy and thoughtless and not nice.

The first hike or two we went on I found myself wishing I had a MOOP bag.  (When you're at Burning Man, you carry a bag with you you can pick MOOP up and take back to your camp to take off playa with you when you leave.)  And when we were at this one particularly remote, lovely place and there was a beer can?  I picked the damn thing up and put it in my backpack.

And from then on, I started carrying a baggie with me in one of the pockets of my backpack.

We'd stop, and if there was a beer can or some cigarette butts or other random pieces of MOOP, I'd pick them up and carry them back with us to dispose of later.

I still get frustrated though.  Like the time we were leaving a beach a little drive away and I ended up leaving with a bag full of cans, and I was so angry.  People had chucked them into the bush.  When they'd had to have driven a car to get there and could have VERY EASILY taken the damn empties back with them and I was raving by the time I'd picked up the fifth or sixth different empty.

But as I was placing the bag into my trunk, Jason told me how he thought it was really cool that I did that.  And so that calmed me down a little.

I just don't see why not, you know?

It's not harming me in any way to pick up a few things and stuff them in a pocket or backpack and it makes the place look nicer and stops someone else from being frustrated by the littering.

Here's the thing... leaving no trace isn't that hard to do.  You pre-think, you make sure you're managing yourself, and you clean up after anyone who for whatever reason didn't manage to manage their own stuff.

You see something that's not supposed to be there?  Take it with you.

Don't just... step over it, shaking your head, grumbling about what's wrong with people.  I'm not saying cleaning up MOOP will fill you with a glowing sense of angel holiness.  It might make you just as frustrated and grumpy as it makes me.  But it'll also make the place you just were a little bit nicer.

So maybe think about having an extra baggie in your pocket.  And picking up the MOOP you usually just ignore...

Or, you know, just be extra careful not to leave any of your own.

Sorry, didn't mean to turn this into a sermon... just...well, I think little things actually do make a difference and it's up to the good folk to do what we can, you know?
Posted by Victoria at Monday, December 01, 2014

This pisses me off too. Espeically on our golf course. There are garbage bins on every tee block. Use them! Grrrr...

Admittedly I'm not nearly as good about picking things up in nature. I usually get silently angry. Maybe I start doing things differently and contribute rather than get angry.

Yeah, I did that (and probably still will) for a long time... just... got mad and grumbled. Like I said, I still grumble.. but maybe the person after me won't? :)