Some People Are Lame

This weekend I did something I'd never done before, and never really thought or expected to do - I picked up shotgun shells.

Jason and I went for a drive and up a logging road (I think?) that I guess folks use for recreational reasons, including, I discovered, shooting.

We drove past a group of people shooting and I was like "huh, that's not anything I've seen before" and then we got to a spot where we were going to hang out for a while and I got out of the car and saw the ground littered with casings.  (Please excuse me if I have the wrong terminology!)

It was ugly and made me so frustrated.  So I spent some time picking up the shell/casings and felt a whole lot better about things once I'd done it.

I have personal thoughts about shooting as a... thing, but I am so very seriously not ok with anyone leaving any kind of litter no matter what their activity of choice is.  Lame, lame, lame.

Jason said it's one of those things were lame (he didn't use that word but I will be polite) people give a bad name to everyone.

The best part of the story though is that he has a friend who's Dad recycled the casings and that made me feel even better!


(It might not look like much in the photos, but I probably collected upwards of a hundred of these things.  I'm glad they're no longer there.)  Before and After: 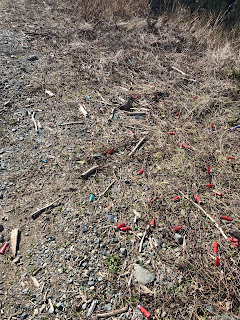 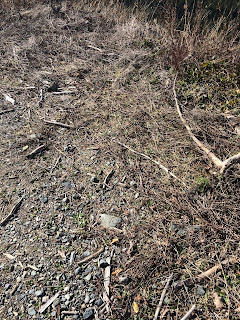