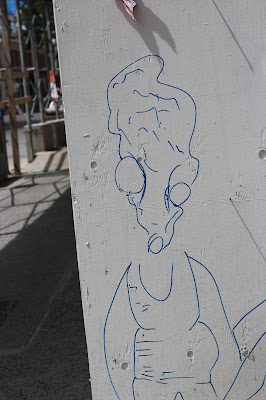 I've had dreams of Burning Man this week.  Which isn't a huge surprise as I've been talking about it more this week as ticket information recently came out.

Both of these dreams were a little different for me though as usually my Burning Man dreams are "stress" dreams - I've not packed, I'm running late, my parents are there and hate it.  And my usual Burning Man dreams don't usually happen *at* Burning Man, but at some other random place... in a field, on a boat, in a carnival... etc.

These dreams were also happy.  Which is unusual.  In the first, I had decided to go at the last minute (I'm 99% decided *not* to go this year) and I hadn't sold my ticket (weird) and so I threw my stuff in my car (my poor car!) and was having the best time, so excited on my drive down.  I was almost at the place on the drive where I lose cell reception (the last three or so hours) and I realized I didn't know which of my friends might be there, since I hadn't planned on going.  So I, in the dream, texted one particular friend to find out where I might be able to see her.  And then the dream was IN Burning Man and it was hot and dusty and yeah.  Happy.

The next one was the night after and it involved my family.  I was explaining to my parents (who were fairly happy, sitting on lawn chairs watching things... in a place that was kind of Burning Man but also a little not) that if they took their car to the DMV they could probably get a disabled sticker (as my Dad had a disabled placard post heart surgery) and so they could drive out to see the art (since they weren't biking or walking). Then my brother was there and I was telling him that his kids could come since kids under 12 are free and just need a "kid's ticket" and then I woke up.

So I guess it was nice to have non-miserable Burning Man dreams for a change?

Posted by Victoria at Wednesday, February 12, 2020

Well, definitely better than miserable ones.

My weirdest dream lately was my friend and I doing an in-depth categorization of the jokes on FRIENDS using some kind of elaborate numbering scheme.

The problem being that nowhere in my dream was the numbering scheme explained. So we were arguing whether or not this joke Joey made was a 3 or a 5, and I had no idea what the joke was, or what the categorization meant.

Would love to see the results ;)