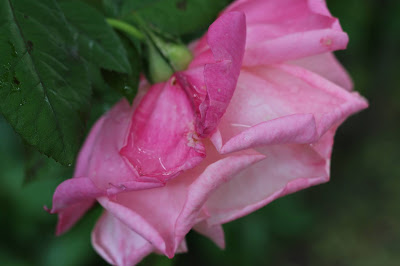 Oh, y'all?  It took me a while to realize it but I have not been doing as well as I thought I was.

(If that even makes sense the way I typed it...)

So you probably know that a month or so (?) ago, I started a graduated sort of attempted return to my work (that I don't talk about) with some volunteering at [workplace].

And I was supremely anxious about it for all sorts of reasons with the added anxiety of Covid thrown in there for good measure.  (Sigh)

The first week I was exhausted.  And this was unsurprising.  The practitioners (and experts) I spoke to said this was totally normal and to be expected and therefore no big deal and good job me!

So I did.  I kept on keeping on and the exhaustion didn't change.  On the non-volunteering days I had no energy and no, what, drive? to do the things I'd been doing previously.  The only days, for example, I'd get out for a walk were the days I was coming home from [workplace] and would just push myself to eat and then get out for a walk before collapsing.  But other than those days there was a sharp drop off of activity and function.  Art creation?  Meh.  Writing?  Meh.  Whatever else?  Meh.  Food?  Meh.  Blah.  "Too tired."

Well this is frustrating, I thought, but it'll likely level off as my body gets used to the new level of activity (and anxiety).   I mean damn... I've been basically not leaving my house other than to visit Jason for dinner (he's my one Covid-bubbble person I'm allowed to see as per PHO) and now I was interacting with WAY more people than I wanted to during an ongoing pandemic and plus doing a whole lot more, for lack of a better term, socializing.  You know, interacting with humans.  There are no humans in my apartment... other than me.  And when I visit at Jason's there is him, and occasionally I say hello to a roommate in the kitchen.  But at [workplace] there are waaaaay more than two people and so even if part of me wasn't scared they might have Covid, I'd still be going from basically 0 to like 80 in terms of being around people.  You know, the thing that literally drains introverts.  So I figured it would level off as I got used to.... all of it.

But see, I hadn't been telling them about this other thing that I'd started noticing because I didn't think they were related, but the penny dropped this last weekend when I casually brought it up with Jason and he was like OMG YES, but I have been really, like really, really exceptionally hard on myself in the last few weeks or month.  Like just brutally so.

And not even about work.  (Which is why I likely didn't make the connection).  Just brutally unkind about myself and like how I look, or don't look and just generally really really really negative self talk that I found pretty unexpected (it's been a long long while, honestly) and completely draining.  Because it's hard to motivate yourself to get up and head out for a walk when you hear nothing but how awful you are and how fat you are and how old and unattractive you are because man... that is not motivating at all.  Not for me anyway.

So I mentioned this to Jason, how I was feeling really unattractive and miserable and he said that he'd noticed this in a massive way since I went back to [workplace.]

So I sat with that for a while.  Pretty confused.  Because I could understand if volunteering made me anxious.  That would make total sense.  And I have ways to help cope with that.  But my anxiety has been, if not great, manageable through this. So... what?  Why?

It's not as if when I'm volunteering people are being mean to me or looking at me funny or anything that could remotely be interpreted as causing such self-destructive talk.

I was sitting feeling really blah on my couch last weekend and for whatever reason I thought "I'll go take one of those online depression quizzes"... no idea why.  And I did one and it was like "hey, you may be seriously depressed, please talk to someone"  Huh...  and I did another and I paid more attention to the questions "how often are you feeling a lack of motivation to do the things you usually do?"  "how often are you noticing negative thoughts and feelings?"  Huh.  Hmmm... And then THAT quiz was like "hi!  you seem pretty depressed, consider talking to a counsellor!" and my brain went, WAIT!  WAIT!  I'm depressed????  I'm depressed!!!

And it was like almost a moment of relief.  Because it's not as if I am suddenly "old and ugly and fat" and whatever else I was hearing in my brain, it was more like the volunteering had triggered a depressive episode and my body and mind had slipped into that state without me even knowing or noticing.  Woah.

And this is one of the reasons I think everyone should consider regular counselling or therapy, because I had a counselling appointment the next day and I went in with this information and honestly, I cried a lot.  And we agreed I was in a depressed state (but not big D depressed exactly) and we talked about the likely reasons my brain had gone there (a subconscious sense of failure from being a part time volunteer at the place I used to be a full time workhorse) and how to move forward in a positive direction while being aware of what was going on and where I was genuinely at.

But I did want to note it.  That I've not been ok.

And how that "not ok" really did sneak up on me, unnoticed and take over in a way that I did not expect and did not relate to what was going on on the surface.

I wish I could say the "hate myself" thoughts had completely, suddenly disappeared, but I'm still dealing with them, just a little less in the dark now.  I have a lot of anger and sadness (possibly what I meant by the attempted post hint "hate" the other day) and a lot of things to work through and I have no way of knowing if this will improve now that I (and my team) are aware of it.... I don't know.  I don't know and life is a lot and on top of it all I have so many fears and concerns around how we ("society we") are going to move forward pandemic wise in the next 6 months to a year.  Life is a lot right now.  Pandemic be damned.

It really seems to be the way with the anxiety that it finds it way into cracks and crannies of the mind and just slowly chips away. There's the occasional panic attack, sure, but I find it's more this subtle seep that you don't always notice right away that seems to do the most damage.

I'm glad other Jason helped you find the linkage. I have noticed something similar myself in that the occasions where I'm in or around groups are way more draining than they were before. Back when this all started, I commented to a co-worker that I found being around other people required a lot of emotional "muscle", and that I was afraid that working from home I'd stop exercising those muscles as much... and I think that's true.

Right now, I'm not sure how I'll adapt to going back to an office when that starts up again.

I think a lot of folks have noticed the same thing too and I hope that any eventual "return to office" for SO many is done gradually... because there are aspects to being around folks that really should be taken into consideration... like you said for the emotional "muscle" part of it. Even just being out of practice or out of habit...
*hugs*