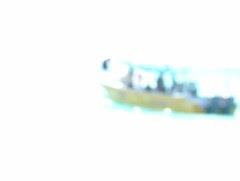 An update, you say?

Now, for those of you who play along carefully at home, (like Yvonne,) you may have remembered me mentioning, once or twice, a guy I've had a crush on for a long while.

Said guy, who will now be referred to as Huck because B's girlfriend came up with Huck and it's better than any I came up with (Chuck? Doug? Steve? Simon? Randy? Paula? Huh?) is really a good looking fellow, and 99% of the girls I've ran into who've met him agree.

I've known (about) Huck for a long time as we used to share a social group; I was dating one of the friends of his friend kind of thing. He had a girlfriend at the time and I was super shy (I mean, miles shyer than I am now) so we never interacted. Fast forward a few years and I've only ever admired him from afar, never knowing if he was single and when I found out he was single, never having the guts to really talk to him.

Until the other week.

I don't know if it was driven by my (slightly) competitive nature upon hearing that a friend of a friend had randomly decided to ask Huck out for coffee or just frankly me growing up and deciding I was tired of being scared of something as simple as talking to an attractive guy or a combo of the two things, but last week, I waltzed into his place of work, called him over and talked to him for a few minutes.

It may not have been life-changing for him, but man was I ever on a high after that. Adrenaline rush? Why, yes, thank you very much.

A while after that B mentioned to Huck that I'd said I'd run into him and I was hoping Huck would ask B for information about me, thereby fulfilling all my fantasies and wishes and starting us on the road to having adorable babies and a happily ever after.

Alas, this did not happen.

I mulled it over for a while and decided that since I'd already started the ball rolling, I'd take it another step. See, Huck and I, at the end of our conversation, left things at "Well, we should hang out sometime" (me) and "Well, I'm always here, come by and" um, I actually forget what he said because I was kind of freaking out internally at this point. so I left him a note the next time I was by his workplace with my number and telling him he should call.

Alas, this has not happened either.

But I'm fine about it.

I mean, I'm not jumping for joy, (and quite possibly a bottle or two of wine may get opened in the near future to help in sorrow-drowning, you never know) but at least I put myself out there and (re)introduced myself to a guy I've always found attractive. I think that's an awesome accomplishment in itself.

And while I still wish Huck would call and realize his long lost love for me, I'm also fine knowing that there is a great guy out there for me and that Huck will never know what he's missing.

Plus, he's still nice to look at. Ain't nothing wrong with that.

PS. Yes, I did just update this. Why? Oh, um, because I kind of somehow used the wrong nickname anyway because it seems my brain is melty or something so I had to change them all because, well, yeah. And, yes, I may just be putting on a brave face. You'll never know!

Good for you on taking a chance! Gotta live without regrets, right?
(Knowing The Universe, he will probably call when you're dating Next Fabulous Guy. Ah well too bad for him!)
I think I will join you in that bottle or 10 of wine. I just had my heart shattered for the second time in less than 5 months. Best part? Same guy both times! I'm trying to see the humour in it. Really, I am. ;)

Thanks V. ;)
I fear I have no one to blame but myself, though. I'm stupid about boys!
(And what's that they say about insanity? Doing the same thing over again and expecting a different outcome?! lol)

Yep, that is what they say! Maybe we're all a little insane when it comes to boys ;)

The 'Simon? Randy? Paula?' had me laughing out loud :D